Greenlight > Games > J_C's Workshop
Greenlight is being retired. For more information on how to submit games to steam, refer to this blog post.
This item has been removed from the community because it violates Steam Community & Content Guidelines. It is only visible to you. If you believe your item has been removed by mistake, please contact Steam Support.
This item is incompatible with Greenlight. Please see the instructions page for reasons why this item might not work within Greenlight.
Current visibility: Hidden
This item will only be visible to you, admins, and anyone marked as a creator.
Current visibility: Friends-only
This item will only be visible in searches to you, your friends, and admins.
A Long Road Home
Description Discussions0 Announcements12 Comments66 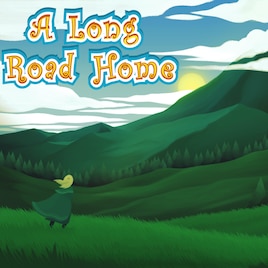 J_C
Offline
See all 8 collections (some may be hidden)

View A Long Road Home in the store

Just a little more patience, that's all we ask of you. :) The Steam release of A Long Road Home is crawling closer each passing second.

Our point and click adventure game will arrive to Steam on the 31. January, with Steam achievements and trading cards for the price of $2.99.

The release will feature a free demo, so you don't have to make a blind decision when purchasing.

Unbelievable! A Long Road Home has been greenlit this morning! I don't know what to say, you are the best guys and gals, couldn't have made it without you! Nothing else left, but to implement achievements and trading cards, and we will be ready for the Steam release. FULL STEAM AHEAD!

A Long Road Home is an old-school point and click adventure game created in a 2D top down perspective. Despite being created in the RPG Maker engine, our aim was to make the gameplay as similar to the adventure games of old as possible, thus ALRH uses a mouse driven interface. We also implemented interesting puzzles to challenge the players, and of course no adventure game can be complete without item management. The player will find many items in the game world, which can be examined, combined with each other and used at different places to overcome obstacles.

While it would be hard to deny that A Long Road Home was created in the RPG Maker engine, we worked hard to make the gameplay different from regular JRPG style many RPG Maker games are known for. If you are appalled by this graphical style, you probably will not like our game, but those who can look past the graphics might find a gameplay they enjoy a lot.

You definitely can. A Long Road Home was released on the 23rd of December 2016 on several indie platforms. You can purchase the game on itch-io[01bitstudio.itch.io], as well as on IndieGameStand[indiegamestand.com] we are working hard to bring it to other sites. Our final goal is winning over the crowd of Steam users of course, this is why we are asking for your help to get the game Greenlit.

If you have any doubt, please take a closer look at ALRH, the demo is ready for download on these links:
Itch.io - Demo[01bitstudio.itch.io]
IndieDB - Demo

Although spoiling the story of an adventure game is a deadly sin in our opinion, we can give you a glimpse into the world of ALRH. The game starts with the protagonist getting separated from his family, waking up in an unknown village after a serious wound. From there, the player will embark on a journey to find his loved ones, and to discover the plans of an evil tyrant, who travels from world to world, enslaving everybody she encounters. Will you save the world from this enemy, or let her tighten her grip on the world, just to save your loved ones?

We would like to thank the RPG Maker community all the help they gave us in the last year. Without their resources and advices, A Long Road Home couldn’t have become a reality.
< >
66 Comments

for the boringst game i know, than it show how powerful MANY EASY steam achievements are :) so you do a good choice :) Thank you J_C

J_C  [author] Dec 30, 2016 @ 12:57pm
You can move your character with a gamepad, but since the game is a point and click adventure game, there needs to be a lot of pointing and clicking. :) You need a mouse for that, the game is designed with mouse control in mind.

KaiyoriaChi Dec 29, 2016 @ 9:20am
just bought on Groupees Build a Bundle 26 hope it comes to Steam soon I'd rather to play with Acievements

A Long Road Home has been Greenlit and is now listed in the Steam store. For the latest information, purchase options, and discussions for A Long Road Home, please see it on the Steam Store or in the Steam Community.
Visit Store Page
For more details Visit Community Hub
For latest discussions
If you really, really want to, you can continue to the Greenlight page. Information on this page may be out of date, since all the action has moved to the areas noted above.