Greenlight > Games > Pro-Choice Fetus's Workshop
Greenlight is being retired. For more information on how to submit games to steam, refer to this blog post.
This item has been removed from the community because it violates Steam Community & Content Guidelines. It is only visible to you. If you believe your item has been removed by mistake, please contact Steam Support.
This item is incompatible with Greenlight. Please see the instructions page for reasons why this item might not work within Greenlight.
Current visibility: Hidden
This item will only be visible to you, admins, and anyone marked as a creator.
Current visibility: Friends-only
This item will only be visible in searches to you, your friends, and admins.
Cave Brawlers
Description Discussions0 Comments48 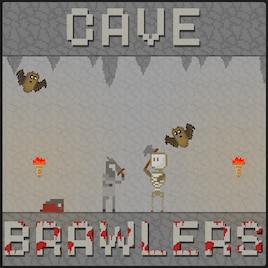 View Cave Brawlers in the store

Play the demo and subscribe on the website![cavebrawlers.com]
Cave Brawlers is a 2D hack 'n slash which takes inspiration from games like Castle Crashers, Wonder Boy in Monster Land, and Shovel Knight. The game requires the player to use different moves and combinations to take down enemies and succeed.

Cave Brawlers was originally made for a Ludum Dare, a 48 hour game jam, in April 2014. After receiving positive criticism from the game I decided to run with it and complete it. The original game can still be played, from the Ludum Dare website[ludumdare.com].

It has not been an easy two and a half years...

I find some of today's games to have just too many controls and over complicate things. Sometimes I just want to play a game, not learn a control map to play or constantly go into my settings to see what the controls are. Many times I will pass a game's tutorial and play a few levels and put it down for a month or longer and have no idea what I'm doing.

This is my solution. The controls are very simple or at least I think so... I mean I have been making this thing for two years...

There are also many enemies you'll encounter on your travels through the caves,

In a kingdom very far away and in a time long long ago there lived a King in his castle. In that castle worked a soldier that stood guard outside the royal palace. After a long day's work he goes to the local pub/club to unwind and relax. During his time there a explosion could be heard outside, an explosion so strong that it knocked down the disco ball and took out the electricity. The soldier rushes out to find out what has happened. Upon leaving he finds out that he is too late. His co-worker has been trapped and left behind in a cage... but by who...

The explosion had knocked out the wall built by Trolnald Chimp, the 45th king of the land, to keep out the unwanted pests. You must rush to the old castle wall and defend the city with a turret. Upon completing this you free your co-worker and return to the castle to learn more about the invasion.

The Cave Dwellers had invaded the surface and kidnapped many of the soldiers and country-folk. Find out what happens next...

The Cigarette Lizard King
The Cigarette Lizard King is inspired by an incident I had at work. A lizard had invaded the store and was able to find sanctuary in the cigarette shelves. One day he finds the strength to peak out. He climbs the L&M's and plans his escape. Unfortunately I had to grab some of the cigarettes he was sitting on top of to sell. I wave my hand over and he does nothing. I admire his bravery but the customer and I are getting impatient and neither of us are about to go up against a decedent of the Dinosaurs so I sprayed him with a water bottle and he jumped out onto the ground and went back into the shelves. That was the last I heard of the critter, however the rest of the week I felt uneasy about grabbing any cigarette's from the shelves.

Currently the Cigarette Lizard King is the only boss I've really planned so far, I have a few other ideas but I'd like to see how I plan the rest of this story out.
< >
48 Comments

Pro-Choice Fetus  [author] Aug 22, 2017 @ 5:07pm
@devotee After reviewing the feedback and comments I decided to rework some of the game. I am currently working with artist to redo a ton of the art and take it in a new direction as well as make the game more story based rather than a mario type level system :) i hope to get it out by winter 2017.

Pro-Choice Fetus  [author] Feb 16, 2017 @ 7:44am
We were just greenlit! I don't even know what words I can use to describe the feeling. I am incredibly grateful for everyone who bought the game on groupees and took the time to vote. I'll continue listening to feedback and making changes as I go. I love you all. <3

Pro-Choice Fetus  [author] Feb 4, 2017 @ 6:09pm
Thanks for the support! @PurposelyDrifting No vote pumping going on lol. I'm sorry you feel like the game is too dull or repetative, any feedback would be an amazing help and I would massively appreciate it. Thank you for the support again, excited to see new comments after this long time.
< >

Cave Brawlers has been Greenlit and is now listed in the Steam store. For the latest information, purchase options, and discussions for Cave Brawlers, please see it on the Steam Store or in the Steam Community.
Visit Store Page
For more details Visit Community Hub
For latest discussions
If you really, really want to, you can continue to the Greenlight page. Information on this page may be out of date, since all the action has moved to the areas noted above.