Store Page
ARK: Survival Evolved>  Workshop > Clutch152's Workshop
This item has been removed from the community because it violates Steam Community & Content Guidelines. It is only visible to you. If you believe your item has been removed by mistake, please contact Steam Support.
This item is incompatible with ARK: Survival Evolved. Please see the instructions page for reasons why this item might not work within ARK: Survival Evolved.
Current visibility: Hidden
This item will only be visible to you, admins, and anyone marked as a creator.
Current visibility: Friends-only
This item will only be visible in searches to you, your friends, and admins. 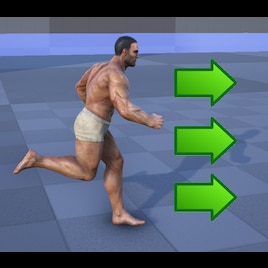 Yippee38
Online
See all 620 collections (some may be hidden)

This item has been added to your Subscriptions. Some games will require you to relaunch them before the item will be downloaded.
Description
Description
This mod provides you with a buff that enables you to run without holding down forward and sprint to make those long journeys across the map less devastating to your fingers.

Key Fatures
* Auto run by pressing the Num+/ key typically located next to NumLock key.
* Toggle between walking and running with the Num+* key.
* Open settings menu with F10 key.
* All default keys listed above are re-bindable in settings menu. (Will NOT overwrite anything already bound to your desired keys.)
* Auto run is deactivated when either you press the auto run key again or you press forward or backwards keys or left analog stick up or down.

Key uses
* Auto run allows you to open menus and inventories while running so you can drop unneeded loot or even craft while running!
* Less wear on your keyboard and fingers for those long journeys.

Changes from previous version
* Works on Extinction.
* Old crappy hud addition has been removed.
* Seemless transitions to and from autorun.
*** While holding forward you can toggle auto run on and it will not automatically cancel. Movement key must first be released before it will deactivate with movement keys.
* Bears now accelerate to top speed as they should.
* Griffins can now dive if auto run is toggled on and in the running state and will cancel a dive if switched to walking state.
* Non-aquatic dinos/animals can now ascend properly when holding jump while swimming. (Players too)
* While in fly mode (cheat) your player character will now properly ascend or descend when looking up or down.
* Climbing dinos DO work but may still be a bit buggy due to their transitions from climbing and walking. While climbing pressing forward may or may not cancel auto run. It is best to toggle off auto run with the backwards movement key/stick or with the key bind.
* For your safety, when jumping with a glider skin equipped sprint mode is temporarily set to walk mode until you have landed. This keeps you from crashing into the ground when starting your glide. You won't notice the run state change to be honest...
*** Glider still functions as normal so holding the sprint key will still start your dive and releasing will stop the dive.

Much of this mod has been reworked and should now work anywhere in your mod load order.

Possible issues
Glider functionality may or may not work if using a glider mod. (Havn't tested them all but works with Classic Glider mod)
Popular Discussions View All (5)

FrostEffects Jul 17 @ 12:34pm
anyone know if this works with rafts?

TerrestrialNommo Jul 11 @ 2:33am
Oh I see the idea now. I play with a controller so I didn't think of that.

Clutch152  [author] Jul 10 @ 8:20am
yup :) Been getting on with a friend to help with testing things and some other utility mods I had some ideas for :D

x0Z3ro0x Jul 10 @ 7:41am
Hey clutch, hope you are doing well. Was just curious if you still had plans to add that server setting we talked about. Take care, talk to you soon.

Clutch152  [author] Jul 10 @ 7:30am
That setting in the options menu is just the difference between holding shift to sprint or pressing and releasing it once to continue running. In normal game play you would still have to hold forward input of some kind manually.

TerrestrialNommo Jul 10 @ 6:24am
I just assign a key in options to toggle between walking and running.
The option is called "Toggle Run"

x0Z3ro0x Jun 26 @ 4:10pm
I personally think that is a perfect way to handle it. Allowing it to be configurable suits all parties involved. Look forward to seeing what you update. Have a great day / night.
< >