Greenlight > Games > TargonStudios's Workshop
Greenlight is being retired. For more information on how to submit games to steam, refer to this blog post.
This item has been removed from the community because it violates Steam Community & Content Guidelines. It is only visible to you. If you believe your item has been removed by mistake, please contact Steam Support.
This item is incompatible with Greenlight. Please see the instructions page for reasons why this item might not work within Greenlight.
Current visibility: Hidden
This item will only be visible to you, admins, and anyone marked as a creator.
Current visibility: Friends-only
This item will only be visible in searches to you, your friends, and admins.
Nuvoid
Description Discussions0 Announcements2 Comments51 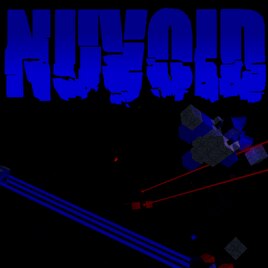 TargonStudios
Offline
See all 7 collections (some may be hidden)
Recent Announcements View All (2)
Nuvoid bundled with 7 other great games!
November 27, 2016 - TargonStudios

Nuvoid along with 7 other games have been bundled together for only $2.99! But if you act fast, you can pick them all up for only $1.99! Make sure to check out the bundle at: http://www.lazyguysbundle.com/

Just released the demo for Nuvoid so make sure to try it out!

Read More
Description
Release date: Early-Mid 2017
Even with the extinction of the human race over 200 years ago, war rages on like nothing has changed. Long-abandoned factories remain operational, constructing fighter drones to continue the war effort. Immerse yourself in the chaotic galaxy by fighting, exploring, looting, and building your very own voxel-based ships completely from scratch.

Nuvoid is a free roam sandbox game where you build your very own ships entirely from scratch! The game has no pre-set controls. Rather, YOU build the controls. Every single engine, weapon, thruster, and so on that you place you must assign to a key. So if you want your ship to move forward using the "w" key then place an engine and assign it to the "w" key!

Nuvoid will be story driven having the choice to complete missions and do quests, but at the same time, nothing is stopping you from flying into any direction in space to explore huge asteroids, discover long abandoned space stations, fight other drones, and upgrade your ship!

A fully functioning demo is ready to be published as soon as Nuvoid is Greenlit so make sure to vote, and tell your friends!
< >
51 Comments

Sylvsyntax Oct 2, 2017 @ 8:01pm
@TragonStudios Oh trust me, I understand how much it means. Im working on a game called Darkness and a Crowd (Also on Steam) and everytime I read something as small as knowing I have any sort of fanbase, It fills me with so much joy and excitement to work on the game again. I've been using Steam Updates to keep the community informed with the progress and ask for suggestions. I have a few dedicated fans and I hope to be that with your game. Honestly, my favorite games in the world are games like Minecraft (I know, lame) and Starmade (I own up proudly to that one). Watching a new indie developers take on this is going to be amazing.
I hope I dont look creepy, always keeping up with your game as soon as I encounter things. Along the lines of loyal fans, it is also quite creepy sometimes seeing the same person comment on everything (this time being me lol).
But I do understand what its like to be in your shoes, and Im by no means rushing you. :D

TargonStudios  [author] Oct 2, 2017 @ 7:06pm
@Sefernaut You have no idea how much your comment means to me, thank you so very much! :)
It fills me with so much joy knowing that people are still excited about my work.

Honestly, I need to get a lot better at using social media and keeping people up to date. I'm going to be making quite a few announcements soon about what's going on and the state of things. I can assure you that much.

Thank you so much! This has meant so much to me and has most certainly filled me with hope. Expect some updates on what's going on very soon!

Also, apologies for the delay in response. I moved recently and have been extremely busy. Thank you so much again for your kind words :)

Sylvsyntax Sep 15, 2017 @ 5:05pm
I'm not quite sure how big of the team is that is working on this but maaaake your steam paaaaage! I absolutely loved the idea of the game and I caaaan't wait for it to come out so I can actually play it!
I know working on a game in a small team or even by yourself can be repetative and boring. But I also know first hand that recieving handfuls of comments knowing there are still people out there that care can actually fill you with hope.
Although I'm not sure how successful of a job im doing with filling you with hope, I sure as hell want you to know there are people watching and waiting for your game to release. Paying attention to the smallest news you can tell us about the process and how close you REALLY are from completion.
I loved the idea and I can't wait to see something of it!

TargonStudios  [author] Mar 6, 2017 @ 1:50pm
@Sef Albertus Hopefully within the next few months, I'll try and keep everyone posted once I have a better idea

@tricosahedron For the best experience in Nuvoid, a keyboard is probably needed and would be better than a gamepad. Obviously giving people more choice for how to play is always better, so I'm not ruling out gamepad support, but it isn't a priority right now.

tricosahedron Feb 24, 2017 @ 2:08pm
Congrats, and a question: Will there be gamepad support? It would be nice to use boosters or rotate the ship with analog inputs.