Store Page
Total War: WARHAMMER>  Workshop > thesniperdevil's Workshop
This item has been removed from the community because it violates Steam Community & Content Guidelines. It is only visible to you. If you believe your item has been removed by mistake, please contact Steam Support.
This item is incompatible with Total War: WARHAMMER. Please see the instructions page for reasons why this item might not work within Total War: WARHAMMER.
Current visibility: Hidden
This item will only be visible to you, admins, and anyone marked as a creator.
Current visibility: Friends-only
This item will only be visible in searches to you, your friends, and admins. 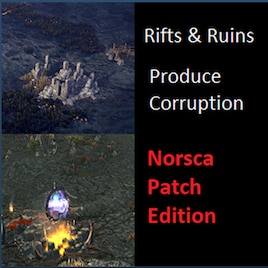 thesniperdevil
Offline
See all 88 collections (some may be hidden)

This item has been added to your Subscriptions. Some games will require you to relaunch them before the item will be downloaded.
Description
Norsca Patch & the change in scope for this mod:
With the introduction of the recent Norsca patch, Creative Assembly introduced chaos corruptiuon to Chaos Rifts and re-adjusted the corruption given by all corruption spreading buildings.
Because of this, this mod now only concerns itself with vampiric corruption.

What this Mod Does:
This mod allows vampire factions to create haunted ruins which cause vampiric corruption.

Setting the Scene:
For a worshiper of the Chaos gods, there is no purpose greater than spreading their masters influence. When roaming bands of these worshipers raze hapless villages to the ground, they will often erect foul constructs in honour of their masters.

These rifts exude the very stuff of the warp corrupting the lands around them with the power of chaos.

But not all foul forces are chaotic in nature.

In the Old World, conflict is common & over the passage of time once bustling hubs of commerce and order become naught but ruins. But where the living cease to tread, a home is made for the undead.
Fleeing from the populated centres of civilisation, many of those practising the dark arts take residence in the settlements of the past, rich with cadavers from ancient massacres.

Left to practice their foul magic uninterrupted, these miscreants often leave a taint on the land they occupy.

Diving into the detail:
This mod no longer affects Chaos rifts. Nor does it affect Beastmen or Norsca effigies.

This mod now adds Haunted Ruins to the game. These ruins are only created by the vampire counts.

Haunted Ruins: produce 4 vampiric corruption in the region they are in.

Thanks To:
Thanks to Cataph for helping me overcoming the pains of creating my first mod.
http://steamcommunity.com/id/cataph/myworkshopfiles/?appid=364360

thesniperdevil  [author] Oct 29, 2017 @ 4:41am
Heh, I am assuming that many of the rift corruption changes that came with the norsca patch are on their way for ME soon, so I'll probably focus on ensuring vampire ruins cause corruption. If for some reason when Norsca come to ME the rift corruption is not added - I will add that too :)

thesniperdevil  [author] Aug 11, 2017 @ 2:13pm
Updating this mod is sort of on the agenda - I am trying to figure out what to do - Chaos rifts now cause corruption in vanilla so a huge chunk of this mod is now redundant.