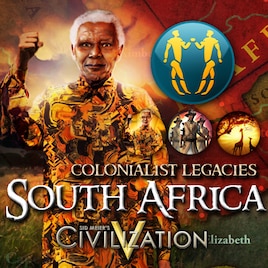 This item has been added to your Subscriptions. Some games will require you to relaunch them before the item will be downloaded.
In 2 collections by TPangolin
[BNW] Colonialist Legacies: Histories of the New World Modpack

52 items
Description
In this mod you'll play as Nelson Mandela, ruler, peacemaker, and symbol of a free South Africa! It was through your action that a corrupt system was brought low and the people of your nation could be treated equally and justly. Born to royalty among the vast, rolling plains of the Transkei, you joined anti-apartheid organizations and conducted a campaign of ardent sabotage and revolutionary acts against the state that viewed you and those like you as second-class citizens. It was through you, despite being imprisoned for more than twenty years, that the world became aware of the hatefulness of apartheid, and it was because of your forgiveness that you became the first true South African leader after it was brought down.

Will you do as you did in life, urging reconciliation and magnanimity in victory? South Africa is an idea for which you are prepared to die, but can that idea, that Civilization, stand the test of time?

Coming soon: The Salish, The Noongar, The Yolngu

Leader: Nelson Mandela
Rainbow Nation: Can build Courthouses in Non-Occupied Cities. Gain one Delegate in the World Congress for every Domestic Trade Route sent between Cities with a Courthouse. Trade Routes with City-States yield +1 Tourism.

Safari Park: Alongside the benefits of the Hotel it replaces and unlocked at Biology, the Safari Park gains unique Resources if build on Plains, Desert or Grassland (Rhino, Lion, and Springbok, respectively). Civilizations with access to these Resources receive +2 Tourism and +2 Gold per Resource, and an additional +1 per Resource to each yield after Ecology has been researched.

murraybillie Jun 24, 2019 @ 2:51am
Sorry What???
Nelson Mandela freed RSA from Apartheid.
No great ruler is perfect but at least he did not hate people because of their race. Do you know how I can tell he was a great person...

No problem, take your time. Your mods are always greats, so need all the time you need for them :)


Also, do you take ideas for possible future civilizations?
If yes, I have somes ideas on this level.
< >