Store Page
Football Manager 2017>  Workshop > Reck's Workshop
This item has been removed from the community because it violates Steam Community & Content Guidelines. It is only visible to you. If you believe your item has been removed by mistake, please contact Steam Support.
This item is incompatible with Football Manager 2017. Please see the instructions page for reasons why this item might not work within Football Manager 2017.
Current visibility: Hidden
This item will only be visible to you, admins, and anyone marked as a creator.
Current visibility: Friends-only
This item will only be visible in searches to you, your friends, and admins. 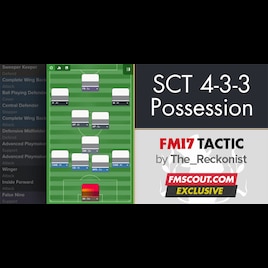 This item has been added to your Subscriptions. Some games will require you to relaunch them before the item will be downloaded.
In 1 collection by Reck
The Reckonist Collection

MORE INFORMATION IS AVAILABLE VIA THE VIDEO ABOVE

Directly support the channel with a donation here: https://twitch.streamlabs.com/the_reckonist
A lot of work goes into each of these videos and your donations let me know you want to see more.

What you will find on the workshop are tactics that offer the Barcelona Tiki-Taka style of play with every midfielder having over 100 passes and the team having over 70% of the ball. Thats all well and good but it has an issue for mid/low level teams trying to play astecically pleasing football and actually producing results. This tactic tries to address that and I have had success. So, im looking to share this with the community and develop the tactic and the theory over the course of this years game.

This guide is a reworking of my famous iteration on FM14. (Which is still the most popular on the Workshop)
The theories and implementation are exactly the same reguardless which version of Football Manager you are playing. The tactic, is timeless.

What you will see.

As with standerd Tiki-Taka tactics, High Possession, High Percentage pass completion, and 'Sexy Football' But, what you will also see is that even with teams with the less than a perfect setup will be performing well and, most importantly for people playing posession football every week, creating enough goal scoring chances to justify the style.

High Pass completion in the Midfield (Average of 85%)
High Defensive Line.
WB able to bomb forward.
Low direct scoring from setplays
Football which is pleasing to look at and get results against teams of similar and lower quality.
Tough time outplaying really strong teams.

Key Attributes and PPM's per position.

Again, I know your not able to click your fingers and buy Xavi for your team but 'try' to get players who fit the roles with AT LEAST one of the required PPM's in each position and have them learn the missing ones asap.

BPD: Likes to switch ball to opposite flank
-Composure, Passing

DM: Stays back at all times. Plays no through balls (Ideal PPM's yet not essential)
-Decisions, Anticipation, Teamwork, Composure, First Touch.

If you have a good Winger and would like to use him;
WG: (If extremely fast) Hugs Touchline and Knocksball Past Opponents)
-Acceleration, Pace, Dribbling, Agility.

F9: If has excellent balance and composure, Dwells on Ball and Plays Killer Balls Often. (Yes, I realise that it is hard to get both of these, but its possible with correct regen and tutor after a few years) Runs with ball through Centre. Tries first time shots, Plays One-Twos
-Off the ball, Finishing, Passing, Technique. Composure

DM (Defend/Support depending on the quality of your best player) Pass Shorter, Mark Tighter

If your looking to hold onto a Lead or counter a powerful team. Don't change the formation or roles unless needed but switch Strategy to Attack, Drop Deeper, Pass into space and More Direct Passing and Run at Defence.

To play out the last minutes in a bit more safety hit More Disciplined. Nothing more.

If you find yourself haveing 'too much' possession and struggling to score, have the team Express Themselves more.
Note: EXPRESS THEMSELVES is set to default in the workshop version. Having trouble at the back? Click it off.

If the pther team is camping on their 18 yard line blocking shot after shot, SLOW DOWN the play. Draw them out of position and make one good chance.

Less than 55% posession? Click "Retain Possession"
More than 66% possession? Click "More Direct Passes" and "Slightly Deeper" (This means the other team isnt pressing you)
Other team hitting you on the counter? click play "Slightly Wider"

Set Pieces:
My set pieces are set to short with strong emphasis on ball retension. So, CB stay back at all times and corners will be short to a supporting wide player. Keep it.

dreaz spiller fm. Jan 22, 2017 @ 1:51am
Hey guys.
I have a question that I hope you can help me with. In the video and in the text above the player instructions are not the same? Which one should I use?

matt_mcm_ni Dec 25, 2016 @ 8:37am
Pretty successful tactic but don't think it's a 'game breaker' exactly. Still use it though. I've found I get very poor ratings for my striker though, regardless of their skill and I've tried a variety of roles with little success.

Currently testing out a Defensive Forward role with player with high work rate and stamina...

BigFattyVince Dec 1, 2016 @ 3:55am
So it seems I can't apply the "close down more" instruction when playing "slightly higher". It's only showing up with a "normal" defensive line.

zanif_19 Nov 19, 2016 @ 1:15am
Got promoted with Birmingham 1st season with this tactic. Very tough 1st season in the premier league thoug, shipping a ridiculous amount of goals. Survived on the last day of the season. Scoring goals was never a problem but conceding them was, for instance at home to Spurs I lost 7 - 4. Being more disciplined from kick off sometimes helped against bigger teams, I went to Chelsea who were 1st and beat them 3 - 0, and also beat Arsenal at home, but my team had the worst defensive record in the division and almost cost us our premier league status

FE2|Sqhuacky Nov 15, 2016 @ 3:44pm
Love your work and your video was superb.
One little question, do the allocation of Managerial Style Points matter a lot to be succesfull at FM17 (and 16)? I found it really smart to "max" out the mental points and then allocate selectively on the coaching points in earlier games. Any thoughts?
< >