Store Page
Starbound >  Workshop > Toozy's Workshop
This item has been removed from the community because it violates Steam Community & Content Guidelines. It is only visible to you. If you believe your item has been removed by mistake, please contact Steam Support.
This item is incompatible with Starbound. Please see the instructions page for reasons why this item might not work within Starbound.
Current visibility: Hidden
This item will only be visible to you, admins, and anyone marked as a creator.
Current visibility: Friends-only
This item will only be visible in searches to you, your friends, and admins. 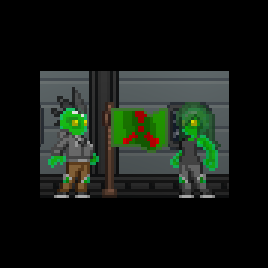 This item has been added to your Subscriptions. Some games will require you to relaunch them before the item will be downloaded.
In 1 collection by Toozy
Good stuff 2

12 items
Description
Originally intended to be a chemical weapon, the Ooze are a race of slime creatures that accidently gained sentience. They come from a derelict factory planet where the entire ocean consists of a single slime mass that all of the Ooze spawn from.

Also
In order to spawn the tenant Vomit there has to be suitable housing with toxic furniture such as the toxic chair, table, chest, and lamps.
For just a random ooze tenant you need one object with a slime tag in the room such as a slime torch.
The mech is craftable by all races until I figure out how to make it specific to this race so for now every race can use it.

Special Thanks To
MothGirlMusic for sound effects,
Xel for hairstyles and other help,
Draco1122 for making it Frakin Universe compatable
Popular Discussions View All (1)

ashen Feb 17 @ 1:31pm
can someone please make a F.U. patch? im looking to move over to fu with my current modset, and really dont wanna let these go

Bierb Jul 21, 2021 @ 6:40am
Imagine if they fell and just splattered all over the place, not being able to re-assemble. If anything, maybe it'd make sense for them to take MORE fall damage(please don't)

Somecraft Jan 20, 2021 @ 10:35pm
Wouldn't it make sense to make these guys immune to radiation as well as not take fall damage
would also make since if they take more damage from fire and nova since they are made of chemicals