Greenlight > Games > Retrotainment Games's Workshop
Greenlight is being retired. For more information on how to submit games to steam, refer to this blog post.
This item has been removed from the community because it violates Steam Community & Content Guidelines. It is only visible to you. If you believe your item has been removed by mistake, please contact Steam Support.
This item is incompatible with Greenlight. Please see the instructions page for reasons why this item might not work within Greenlight.
Current visibility: Hidden
This item will only be visible to you, admins, and anyone marked as a creator.
Current visibility: Friends-only
This item will only be visible in searches to you, your friends, and admins.
HAUNTED: Halloween '86 (The Curse Of Possum Hollow) - NES Game
Description Discussions0 Comments39 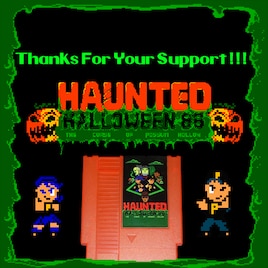 View HAUNTED: Halloween '86 (The Curse Of Possum Hollow) - NES Game in the store

Last year we experienced the gripping tale of Donny Johnstown in the smash hit, Haunted: Halloween '85 for the NES which was just released on Steam here: http://store.steampowered.com/app/538220

We watched on as he fearlessly battled his way through the town of Possum Hollow on Halloween night. Donny punched his way through grody zombies, ghoulish ghosts and killer crows to destroy the evil presence that was haunting his town. This epic story of heroism was told near and far.

It's now 1986 and, although things have been quiet, Halloween approaches...

Join us as we are taken back to Possum Hollow for an all new adventure in this thrilling sequel. This year Donny will have some new friends to help him along the way and it's a good thing because Harry is back with a vengeance and there's no way that Donny alone could stop him. Prepare to have your mind melted by the most radical game you've ever played!
< >
39 Comments

Seriously though, the first game plays extremely well. Glad to be a part of both.

Keep up the good work !

Retrotainment Games  [author] Nov 20, 2016 @ 10:05am
@LameCube That's because it IS an NES game. It was made for the NES and is being built on cartridges. We're porting it to PC for Steam just like we did for Haunted: Halloween '85 which is on Steam now. This game is the sequel and loaded with tons of new, fun things!

Thanks for the votes everyone!!

LameCube Nov 20, 2016 @ 12:01am
Whoa, hey. This actually looks incredibly accurate to an old NES game. I think this is the first time I've been able to say that.