Store Page
Space Engineers>  Workshop > Krypt's Workshop
This item has been removed from the community because it violates Steam Community & Content Guidelines. It is only visible to you. If you believe your item has been removed by mistake, please contact Steam Support.
This item is incompatible with Space Engineers. Please see the instructions page for reasons why this item might not work within Space Engineers.
Current visibility: Hidden
This item will only be visible to you, admins, and anyone marked as a creator.
Current visibility: Friends-only
This item will only be visible in searches to you, your friends, and admins. 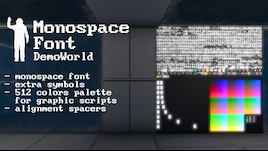 Krypt
Offline
See all 35 collections (some may be hidden)

This item has been added to your Subscriptions. Some games will require you to relaunch them before the item will be downloaded.
Description
So, I finally done it. This is the monospaced font for Space Engineers. Why? Because it gives so many possibilities!

Features:
- Font is monospace, you know :)
- Extra symbols to easiest information delivery
- Colored pixels to use it instead of Keen's gamepad buttons
- Spacers. They is not really requared, but just in case.

Supported languages
- English
- Russian
- Hebrew
- Greek
Also there is Latin Extended A and partially Latin Extended B pages of unicode.
So, probably font can do more.

Installation:
Unfortunately, KeenSWH does not implemented modding support for ingame fonts. Because of this font must be installed manually.
To do so you need to:
- download the font there: https://github.com/krypt-lynx/SEBigBlueMono/releases/tag/1.0
- found the Space Engineers installation directory
- go to "\SpaceEngineers\Content\Fonts" subdirectory
- unarchive content of downloaded archive there

All of symbols from original font located on their charcodes.

Palette usage:
Chars in pallete is just a colored squares

To retrieve required color use this method:

Existing scripts
Almost certainly complex output of script will be broken with this font until spetial fix.
Plan script fix is very simple. You can pickup it in this world.
Configurable Automatic LCDs.. It was a hard nut. But I successfully patched it. But there is bad news starts: MMaster disallowed me to publish it.
So, I'm unable to publish fixed version as separate creation. You still can pickup fixed version in this world, but for a gods sake - do not report issues in this version to MMaster.

Known issues
KeenSWH uses fonts in GUI pretty roughly. So, this is impossible to change lcd font without affecting GUI.
All player's gui is clean and unaffected, but almost all of debug menus uses lcd font for some reason. So, font in is also changed to monospaced there.

Used resources:
font: BigBlue Terminal
Can be found there: http://8088mph.blogspot.ru/2015/12/bigblue-terminal-oldschool-fixed-width.html
Distributed under CC 4.0 ShareAlike license
Some of extra chars was drown by Viper45 from Reddit.

You can open FontData.xml file and copy character from it directly

Krypt  [author] Mar 27, 2019 @ 3:56am
@Khan
Yes, it can. Whipsplash made a good image converter for this exact purpose:
https://github.com/Whiplash141/Whips-Image-Converter