Greenlight > Games > woodsy_studio's Workshop
Greenlight is being retired. For more information on how to submit games to steam, refer to this blog post.
This item has been removed from the community because it violates Steam Community & Content Guidelines. It is only visible to you. If you believe your item has been removed by mistake, please contact Steam Support.
This item is incompatible with Greenlight. Please see the instructions page for reasons why this item might not work within Greenlight.
Current visibility: Hidden
This item will only be visible to you, admins, and anyone marked as a creator.
Current visibility: Friends-only
This item will only be visible in searches to you, your friends, and admins.
Echoes of the Fey Episode 0: The Immolation
Description Discussions0 Announcements1 Comments13 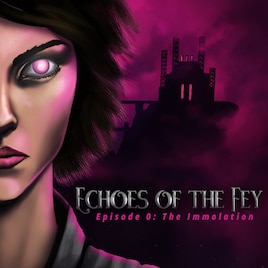 woodsy_studio
Offline
See all 2 collections (some may be hidden)

View Echoes of the Fey Episode 0: The Immolation in the store

Hey everyone! We've just released a new trailer for Episode 0 ( https://youtu.be/ufWAQgjWtFg ) to accompany some exciting news. Episode 0 is content complete and will be ready to release very soon! We are in the final polishing phase, which will be followed by testing, and then release.

We look forward to sharing the final product with you all!
- Jenny and Malcolm

Episode 0: The Immolation is a free, standalone chapter in the Echoes of the Fey visual novel series. This installment will serve as an introduction to players new to the series and provide important backstory to players who enjoyed Echoes of the Fey Episode 1: The Fox's Trail, already released on Steam. Play as Sofya Rykov, before she became a private investigator and before she was cursed with unstable magic powers. An officer in the Imperial Army, Sofya is tasked with guarding Leshin prisoners at Onigrad, a city which will soon become famous for its fiery destruction.

* 3d environments and dynamic camera angles via our new UE4 implementation
* English voice acting (expression lines)
* 30 minutes - 1 hour of story, with multiple choice branches
* Soundtrack featuring new songs and remixes of Episode 1 tracks reflecting the dread of the Immolation of Onigrad
* A free introduction to a series which will span multiple episodes

In the last days of the long war between Humans and Leshin, a tense stalemate has emerged. For years, Leshin have lain siege to the Humans over their use of Fey reactors, massive machines that draw electricity from the realm of magic. Both sides tire after almost thirty years of war, and perhaps peace is now in reach. But Leshin extremists, desperate for a victory to reclaim their power among the people, are about to stage a devastating attack that will change the world forever.

Echoes of the Fey is a series of detective stories set in the high fantasy world of Oraz. Episode 0: The Immolation takes place before the protagonist, Sofya Rykov, becomes a private investigator. She is an officer in the Imperial Human army who believes she has secured a safe position as a prison guard in the metropolitan city of Onigrad. One fateful night, one of the Leshin assigned to her begins to act strangely. And then a massive boom rings out from the Onigrad Fey reactor...

Episode 0 is a traditional visual novel with dialog trees and several choices for Sofya that will affect the way the story plays out. Sofya will also be able to walk around the prison and learn more about the world from her prisoners, though with an impending disaster about to hit the prison, she will have to balance how to use her time before staging her escape.

The script and base engine for Episode 0: The Immolation is currently complete. All the voice acting and music has been recorded and half of the four major environments are currently modeled.

Indie Advertisers Oct 28, 2016 @ 8:27am
Hi, I'm the manager of the Greenlight's Best Games steam group, we do daily showcases of the best Greenlight games, and would love to feature yours. We have over 10,000 members on Steam and over 18,000 followers on Twitter. If you wish to be featured, message me on Steam so I can get more information about your game! I look forward to hearing back from you and your team!

Echoes of the Fey Episode 0: The Immolation has been Greenlit and is now listed in the Steam store. For the latest information, purchase options, and discussions for Echoes of the Fey Episode 0: The Immolation, please see it on the Steam Store or in the Steam Community.
Visit Store Page
For more details Visit Community Hub
For latest discussions
If you really, really want to, you can continue to the Greenlight page. Information on this page may be out of date, since all the action has moved to the areas noted above.