Greenlight > Games > gamesto.love's Workshop
Greenlight is being retired. For more information on how to submit games to steam, refer to this blog post.
This item has been removed from the community because it violates Steam Community & Content Guidelines. It is only visible to you. If you believe your item has been removed by mistake, please contact Steam Support.
This item is incompatible with Greenlight. Please see the instructions page for reasons why this item might not work within Greenlight.
Current visibility: Hidden
This item will only be visible to you, admins, and anyone marked as a creator.
Current visibility: Friends-only
This item will only be visible in searches to you, your friends, and admins.
The Mirror
Description Discussions0 Comments12 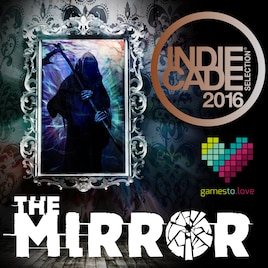 gamesto.love
Offline
See all 2 collections (some may be hidden)
Description
Release date: Q3 2017
The Mirror is a metaphorical role-playing game about self-image, reflections, and reality. The player adventures through multiple lives shaped by the stat-generation of a magic Mirror - but can the surface reflection of a Mirror really reveal the internal measure of an adventurer's talents and destiny?

This body-positive RPG is heavily influenced by the developer's obsession with text RPG "The Wonderful World of Eamon" https://en.wikipedia.org/wiki/Eamon_(video_game) . Due to the perma-death mechanic and a missing manual, each attempt to progress beyond the Beginner's Cave ended in a grisly death and re-rolling a new character via the bartender at the Adventurer's Guild, often on a daily basis. In this game, the Mirror plays the role of stat-generator and determiner of destiny, and it's up to the player to decide how that's working out for them.
< >
12 Comments

ShadowChildofHades Mar 2, 2017 @ 9:48pm
At first glance I was confused. I saw the Cassandra Clare quote and my interest was then peaked. After fully reading the description I would love to play this game one day.

Tod Goodweather Mar 1, 2017 @ 7:53am
I'm afraid body positivity is a plague on mankind, and therefore I can't vote for this