Greenlight > Games > Trinity Team's Workshop
Greenlight is being retired. For more information on how to submit games to steam, refer to this blog post.
This item has been removed from the community because it violates Steam Community & Content Guidelines. It is only visible to you. If you believe your item has been removed by mistake, please contact Steam Support.
This item is incompatible with Greenlight. Please see the instructions page for reasons why this item might not work within Greenlight.
Current visibility: Hidden
This item will only be visible to you, admins, and anyone marked as a creator.
Current visibility: Friends-only
This item will only be visible in searches to you, your friends, and admins.
Bud Spencer & Terence Hill - Slaps And Beans
Description Discussions11 Comments350 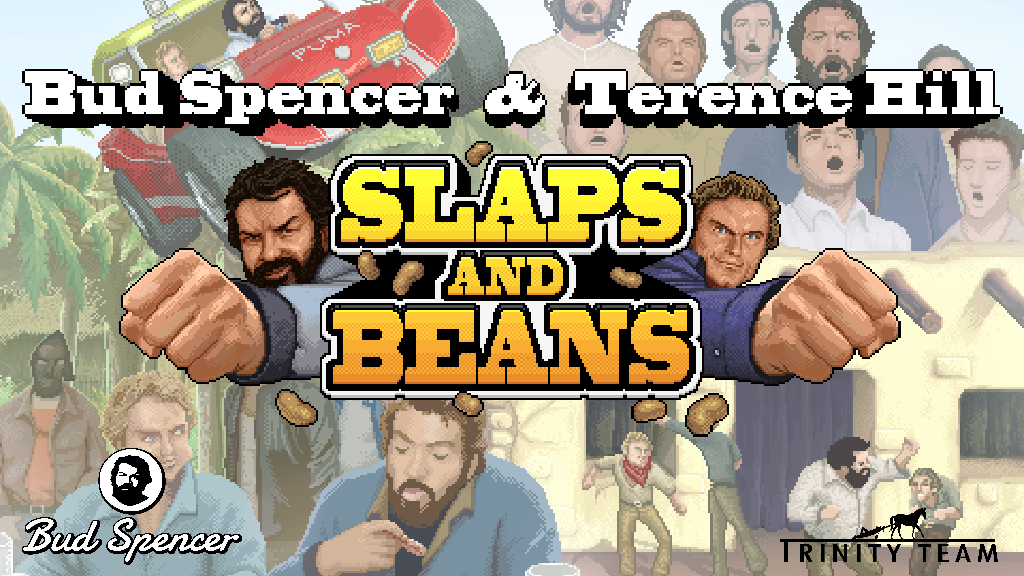 The first OFFICIAL Video Game of Bud Spencer and Terence Hill!
Slaps And Beans is a co-operative or single player scrolling beat’ em up game with the addition of platform elements and mini-games in which we interpret the characters of Bud Spencer[www.imdb.com] and Terence Hill[www.imdb.com] who they made famous in their movies of the 70’s and 80’s. The key ingredients of Slaps and Beans are:

We have already written an original story that pays homage to all the most famous films of Bud Spencer and Terence Hill, characterizing them with the style of the 80's Arcade. The idea is to build something by the Fans and for the Fans so we can all continue to have fun with the adventures of Bud and Terence for quite a while and make them somehow eternal.

“But why do you have to splat the whole car?”
As the title suggests, there will be a lot of slaps. The game will be a cooperative side-scrolling beat’em up (...or single player, if you have no friends. But we recommend you to find at least one, who finds a friend finds a treasure) which is inspired by the great classics of the genre. Imagine a classic like Double Dragon and Golden Axe and add in:

They got our man in Havana sir!” “Too bad.. He was a good agent

The story will take place on different locations to revive atmospheres and quotes (many quotes!) typical of the films. The game levels will be distributed in a Miami 80s, a tropical island and a western scenario.

“They Call Us Trinity”

We have been working as video games developers for several years and, finally, a year ago we decided to create a small free demo of the game of our dreams: “Schiaffi&Fagioli” (downloadable from here). The amount of positive feedback gathered for a project so small and developed quickly and without a budget, has given us confirmation of what we already knew in our hearts: the world NEEDS a true video game of Bud Spencer and Terence Hill. And we need you to make it happen!

Currently the team consists of:
Also collaborating in the project:
Popular Discussions View All (11)

Bud Spencer & Terence Hill - Slaps And Beans has been Greenlit and is now listed in the Steam store. For the latest information, purchase options, and discussions for Bud Spencer & Terence Hill - Slaps And Beans, please see it on the Steam Store or in the Steam Community.
Visit Store Page
For more details Visit Community Hub
For latest discussions
If you really, really want to, you can continue to the Greenlight page. Information on this page may be out of date, since all the action has moved to the areas noted above.