Greenlight > Games > UP Development's Workshop
Greenlight is being retired. For more information on how to submit games to steam, refer to this blog post.
This item has been removed from the community because it violates Steam Community & Content Guidelines. It is only visible to you. If you believe your item has been removed by mistake, please contact Steam Support.
This item is incompatible with Greenlight. Please see the instructions page for reasons why this item might not work within Greenlight.
Current visibility: Hidden
This item will only be visible to you, admins, and anyone marked as a creator.
Current visibility: Friends-only
This item will only be visible in searches to you, your friends, and admins.
WIL
Description Discussions0 Announcements1 Comments11 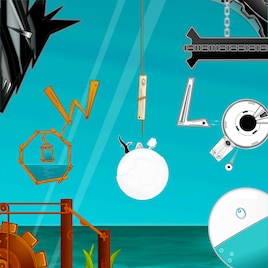 UP Development
Offline
See the collection (may be hidden)

View WIL in the store

Hi everyone,
It has been a while since we published WIL on Greenlight and we think a little update regarding the game development is in order. For The last few months we've been working hard on finalizing the remaining few details of WIL.
1. We've added the Achievements system and the Achievements section in the game.
- there are over 50 achievement unlocked by various accomplishments like beating a certain challenge, using certain number of slings, unlocking all chapters, completing all levels in a chapter etc.)

2. We've integrated a "best times" records system. You can now check your best time for completing a level and compare it with the times of other people.

Aside from that, we've been polishing and building up the menus, adding interface elements and some minor finishing touches.
We hope that soon we'll be able to show a full version of the game.

That's all for now from our team, thanks again for your support and interest in WIL :)

PS:
We hope that you'll really like the finished game and enjoy playing it very much.
( We're also eager to see if, and how fast will someone manage to unlock all the achievements and beat all the levels, some of which are really hard :) )

Wil is a platformer, with side scrolling gameplay and 2D graphics.

The gameplay is built around the abbillity of the main character to roll left and right and to use slings.
The flow of the game is fast. Controlling the main character as well as using the slings requires good timing and quick reactions from the player.
It can get tricky trying to coordinate the hight of your jump with avoiding a moving obsticle, achieving the right hight and at the same time missing the deadly object.

Meet Wil.
He is a ball made of glass .
He has water inside his body. It's what gives him life.
A small ball, containing some water, a fragile little thing. Or so you would think.
But this unremarkably looking fellow is about to embark on a deadly, or should we say- full of possibilities to be broken, adventure.
For, you see, he may be small and fragile but he carries a great and courageous heart in his chest.(wherever his chest in his oval body is).
What happended? Why does he have to risk his glass in some dangerous endeavour?
Prepare yourself to hear a truly dark story. It is a story of a terrible evil. Evil unknown and unheard of, vicious and horrible, gruesome, unstoppable...
But let us start from the beginning, shall we?

It was a summer day on the beach where Wil's friends lived. They were jars, who were made of glass and had water inside them too.

So it was a hot sunny summer day at the seaside. Wil was having his afternoon walk, and jsut as he was about to pick up an amazingly gorgeous seashell, lying half burried in the sand, behind an old treetrunk, all of a sudden he heard an unpleasant buzzing.
He looked up and saw the strangest thing- a flying machine, black, with sharp edges and spikes. There were many of them, and they were flying towards his friends. Without delay, the dark Helicopters started picking up the jars by catching them with shiny hooks, or tying them up with steel ropes. No one had the chance to escape. The attackers were so quick and precise in their actions, that every single Jar was kidnapped in a blink of an eye.

Everyone but Wil, who was now hiding and trembling so hard that his water looked like it was boiling. Boiling with fear, one might say. It was a shock for him, that's true.
Who would do such a horrifying thing?
Some time after the black machines had flown away with the jars, he slowly began to calm down, and with it he began to think. Whatever these things were, they have surely been sent by someone else, someone that needed the Jars for some evil purpose.
One thing was certain however. Wil couldn't let this happen. He had to rescue his friends, he had to find them and help them escape. But how?
Then he remembered- the birds! He'd ask the birds for help, they could follow the black machines in the air, which however scary and equipped with some deadly devices, weren't very fast.
So he went and talked with them.
...

The birds had flown far and wide looking for the black helicopters and they've finally found them. Apparently every single one of the jars had been brought to a different location, in which they were being held as prisoners.
These places were especially designed to keep the Jars inside and prevent anyone from getting anywhere near them, not to mention trying to rescue them.
These prisons were full of all kinds of deadly traps, cutting, sharp blades, dangerous contraptions and obstacles.
Hearing this made Wil feel a cold shiver go down the back side of his glass body. But this wasn't about to stop him from helping his friends.
He has already made up his mind, and some stupid blunt spikes and blades couldn't scare him, right?
Oh, he was scared. Quite a bit actually, but If he knew one thing about friendship, it was that you can't leave your friends in such a terrible situation. Not if you're a true friend.
So no matter how scared or how dire the situation, he had to help them.
See? I told you he had a heart that will not tremble before any danger, didn't I?
So ... a plan was made.

Wil would go to each one of the prisons, and rescue his friends one by one, trying not to attract the attention of the person behind this evil deed. He couldn't let himself get caught too.
But how would he do it? How would he be able to get trough all the traps and deadly mechanisms?
Well, I'll let you in on a secret. Wil has been working on a special device lately, a device that would help him reach higher places and move faster

It is a... sling. Yes that's right, a sling. Oh, don't be fooled by the simplicity of this device. The things that have the simplest design are ofthen the most usefull ones.
And he made lots of them too. He wanted to place them all over the seashore, but now he would have to test them for real, in a situation where failiure would mean him ending up in pieces. Literally.
With the help of the birds he made drafts of all the prisons. Then carefully examining them he made plans and calculations. It was decided:

The birds would fly over the so called prisons, and drop down the slings at precisely determined positions, so that Wil could use them to move past the contraptions, blades and other sharp things.

And so an adventure begins. An adventure full of fearsome dangers and unspeakable risks, but also of great courage, the meaning of true friendship, some truly funny, and some very serious characters ... and a mystery.
< >
11 Comments

HellCow Nov 23, 2016 @ 12:16pm
Hey, if your interested i coud promote your game or/and if you need/want i can test the game.
Also i can get some more testers if necesary, Add me if interested in steam or send me a mail: Liecis19@gmail.com

UP Development  [author] Nov 1, 2016 @ 1:02am
Hi Rachel,
It's funny you should mention it, as we're in fact working exactly on adding the achievements section of WIL right now. We're planning on adding more than 50 achievements.
There is also a Time achievement to be won in each level. You can get a bronze, silver or a gold star token depending on your time.
Thanks for bringing it up.
Have a nice day.

Indie Advertisers Oct 31, 2016 @ 7:25pm
Hi, I'm the manager of the Greenlight's Best Games steam group, we do daily showcases of the best Greenlight games, and would love to feature yours. We have over 10,000 members on Steam and over 18,000 followers on Twitter. If you wish to be featured, message me on Steam so I can get more information about your game! I look forward to hearing back from you and your team!

JimDeadlock Oct 30, 2016 @ 8:25am
If you have plans for it I'd consider that a valid reason to put it on your platforms tag, it might get you a few extra votes.

WIL has been Greenlit and is now listed in the Steam store. For the latest information, purchase options, and discussions for WIL, please see it on the Steam Store or in the Steam Community.
Visit Store Page
For more details Visit Community Hub
For latest discussions
If you really, really want to, you can continue to the Greenlight page. Information on this page may be out of date, since all the action has moved to the areas noted above.