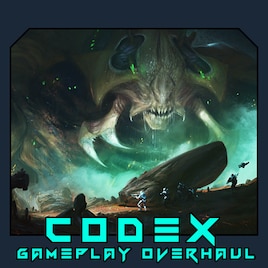 Lordoflinks
Offline
See all 58 collections created by Ryika and other people (some may be hidden)
You need DLC to use this item.

This item has been added to your Subscriptions. Some games will require you to relaunch them before the item will be downloaded.
In 1 collection by Ryika
Codex Modpack

5 items
Description
Codex is a massive overhaul mod that reworks almost every aspect of the game.

Only Works with Rising Tide.

WARNING
This mod will not work properly if you do not activate mods twice!
After launching the game client, you need to do the following steps:
- Go to the Mod menu and activate a mod. It does not have to be this mod, just choose _a_ mod that loads quickly.
- Click 'Next', wait until the "Configuring game data... please wait."-dialog is gone.
- Click the X-Button of the dialog box (or hit escape), you will return to the mod menu.
- Now disable all Mods except the ones you want to use, then click the 'Next'-Button again.
- Done.

You can now start the game and the Unit Action Icons will appear properly. You have to do this whenever you start the game client, but it will then work for the rest of the session, until you close the game. I apologize for the inconvenience, it's a bug in the game itself, unfortunately there is nothing I can do to prevent it.

I heavily suggest to not combine this mod with other mods outside of the Codex Mod Collection unless you really know what you're doing. This mod replaces a lot of files, makes changes to many systems and is likely to run into compatibility issues with almost any type of mod, and not all of them may be obvious while playing.

If you really want to combine this mod with other, unsupported mods, make sure you get familiar with the Logging system so you see whether there are compatibility issues or not.

With that all out of the way, some of the main features of this mod.

The Moonbase
During the game you gain Access to the Moonbase to excavate progenitor ruins found on the moon and gather some strong bonuses. A heavy investment is required though. "Solving" the Moonbase is also required for the new Contact Victory.

Events
Random events trigger during the game, making every game play out differently. Most events are positive in nature and provide opportunities for players to alter their playstyle and change their plans for maximum benefit.

Biomes
Every planet is slightly different from other planets (well, unless you roll the same biome twice. :p), and some Resources will be stronger or more numerous than on other planets.

Affinity Overhaul
Affinities have been reworked heavily and all now have their own style. Affinity is no longer mostly gained by technologies; instead, players generate it from many different sources - buildings, wonders, satellites, improvements, and more. Similar to Religions in Civ 5, Affinities now fight for the minds of the people living on the planet: Spread your Affinity to your neighbors and prevent your own population from being converted to get even larger bonuses!

New Tech Tree Layout
The tech web has undergone a lot of changes, and is now more representative of a tree than a web. It is a bit more linear for a greater sense of progression but tries to keep a lot of the freedom of the tech web, thus has kept the concept of Branch- and Leaf-Technologies, and has differentiated their roles further.

New Worker System
Using a system that I have totally not at all copy-pasted from Civ VI workers now finish (almost all) improvements instantaniously, but only have a limited amount of "charges" before they need to be replaced with new workers. This makes placing improvements more of a "burst"ish ability, which, in my opinion, is a LOT more fun*.
(*Also check out the new Worker Keybinds, they should be a LOT more convenient)

Credits
Art:
- This Mod uses artwork taken from two other games for some of its interface elements: Master of Orion (the new one) and the Mass Effect Series.
- The Moonbase Artwork is taken from an old wallpaper found on many wallpaper sites, couldn't find an artist to credit.

Modder Resources used:
- Vice Virtuoso's Modular Script Loading
- Machiavelli's Policies grant Perks and Buildings
- This mod also uses scripts and snippets based on code that other uses made public on Civfanatics, a great community.
Note: This mod uses EDITED versions of those Resources, the fact that they're listed here does NOT mean this mod is compatible with other Mods using the same resources, it means the exact opposite.

Also many thanks to those who have reported bugs and problems after release!
Popular Discussions View All (22)

It's a discussion thread on that error i believe

Are you running any Antivirus software while playing?

Also - could be an OpenGL issue. Try re-installing your video card driver ...seems to fix it for some.

Ellye May 23 @ 12:33pm
Just want to say that I don't even remember what Civ:BE was like without this mod.

Thanks for making such a great overhaul!

Raysør May 20 @ 8:03am
I don't know why, but this awesome mod doesn't work anymore because of that.
Anyone got an explanation ?

doomman31 May 11 @ 5:48am
I am running into tons of issues. Random promotions on my units keep coming up. If anybody could respond please do.

Booperius Apr 30 @ 2:44pm
Does this mod change anything for Miasma or alien behaviors?
< >