Greenlight > Concepts > Harle's Workshop
Greenlight is being retired. For more information on how to submit games to steam, refer to this blog post.
This item has been removed from the community because it violates Steam Community & Content Guidelines. It is only visible to you. If you believe your item has been removed by mistake, please contact Steam Support.
This item is incompatible with Greenlight. Please see the instructions page for reasons why this item might not work within Greenlight.
Current visibility: Hidden
This item will only be visible to you, admins, and anyone marked as a creator.
Current visibility: Friends-only
This item will only be visible in searches to you, your friends, and admins.
Coterie ™
Description Discussions0 Announcements1 Comments10 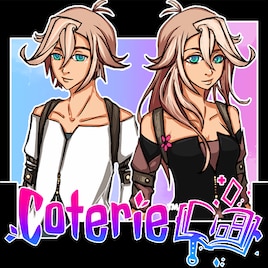 Firstly: Apologies for the radio silence these past few months! Short story: stuff happened, and then it felt odd to me to cram this page full of tiny updates one at time. Updates will be more frequent going forward, at least 1-2 batches per month. Also, due to afore mentioned stuff happening, I've readjusted some of the est dates on demo/release and sadly may need to do so again

Weather: I’ve incorporated weather (random and fixed) to area maps. Nothing super complicated or fancy… just chances for rain or snow to fall in the appropriate seasons and locations, with corresponding sprite changes. Somehow having perfectly dry characters standing in a rain storm didn’t seem right.

Dialogue/Choices/CG: A pretty basic update. Most of this past month has been a lot of back end stuff and prototyping (writing, menus, gallery, field maps), I however have started re-designing the GUI. This of course means I ditched half the customization I've done, but that's ok, starting fresh was a good thing and I think the end result is better. [Text is pretty placeholdery just to have something to show. You can still jump in the ocean if you want though.]

Synopsis
You are Zhen, a Cardsmith sent to join The Heroes on the frontlines as they take on the latest Dark Lord - The Dreaded Demon of the North! Or so you had hoped... Instead, you are suckered into helping a random stranger convinced to help your newest best friend form the Coterie - a growing guild of misfit adventurers. Their mission: support The Heroes! ... From the backlines. The far, far backlines. It may not be glamorous work, but you have to start somewhere. Will you be stuck doing their scrub work for the rest of your career? It's up to you to change your fates... and maybe even become the Heroes yourselves.

Adventure! Friendship! Romance?! Journey across the Eastern Continent of S'en Lucere as you complete quests, gain guild renown, and make friends (or not). And who knows, you may even meet a god or two along the way.

Play as either gender of Zhen (re-nameable), each with their own unique character interactions, events, and endings.

Unique story paths will unfold and change based on your decisions (I dare you to be a jerk to everyone).

A point based relationship system that allows characters to form bonds with each other, adding additional benefits & content such as character events, battle bonuses, and new skills. (Don't worry, you don't have to woo anyone you don't want to, in fact you can all just be friends/frenemies - Friend Events and Romance Events are separate, and based purely on Affinity.)

Party members chat with each other, providing additional dialogue and party interactions outside of the main story

Every NPC has a unique character portrait and name - yes, even Male Guards 1 & 2 have been promoted.

Ask me anything! There will be plenty more updates and content shared in the coming months, but if you're curious about something now, feel free to ask and I'll try to answer (or answer around it if it's super secret or spoilerish!)

Have comments or suggestions? It's ok, be honest! I am open to constructive criticism. Part of the reason for me sharing in early production is for the feedback!

Thank you for your time and interest, please stay tuned,
<3 Harle
< >
10 Comments

Chubs Oct 16, 2016 @ 5:11am
Looks pretty interesting. I'd give it a look over when some gameplay comes out and probably get it if I have the dosh lying around.

Harle  [author] Oct 16, 2016 @ 5:06am
@ Tp Hl Nepu ► Understandable! I'm currently touching up some GUI elements so I can at least add some screenshots of the prototype soon. Granted, different gameplay mechanic screenshots will be introduced in phases. And thanks!

@ soldiergirl.cl ► 2nd person address with 1st person responses to choices (kind of like DnD, with GM and player)

@ [dM]Tengarnos ► I had to look that up lol, I can kinda see it a little with colors and the bangs. Hopefully that's not a bad thing?

Harle  [author] Oct 15, 2016 @ 1:01am
@ Sniperino: Definitely! Video will be included once ready. Things are still in early production; I'll add a Status/Progress section in the meantime. Thanks