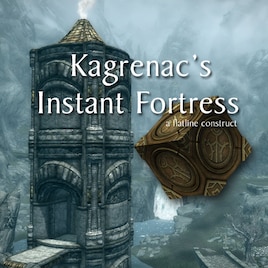 flatline42
Offline
See all 385 collections (some may be hidden)


Long ago, when the Red Mountain halls still echoed with the sound of Mer, there worked a great architect by the name of Kagrenac.

Beyond words were the wonders he could fashion. Giant machines of steel and magic, oil and steam, that could tear through the essence of space and even twist time itself.

Of these marvels, one was particularly sought after, a wondrous fortress existing in the safety of nowhere. A place that Kagrenac himself once called home.

It is told that Kagrenac could fold away the fortress. Into a cube not much bigger than a fist. And build it again in mere seconds, anywhere he so wished.

Many the wizen old mage has claimed to have lived there, many the trickster has tried to sell a trinket in deceit, but none can truly say where or when Kagrenac's Instant Fortress is now.

Lost forever, perhaps, or will some unknowing traveler stumble upon it one day and share this fascination with the world.


Kagrenac's Instant Fortress is your very own portable home. You can build it anywhere in Tamriel world. Just make sure you give it enough space.

The fortress will remain wherever you've placed it until you activate the shutdown cube stand. There is an exit door up the spiral stairs.

The home comes with a full compliment of crafting apparatus, including the smelter. There's also ample storage, 4 mannequins, weapon racks and displays.

It also includes assignable roles for six followers. A cook, two guards, two guests and a spouse. Dialogue with followers is available once you've brought them into the fortress. Followers will automatically teleport home when told to leave, unless they are a current follower. Followers will also automatically teleport into the fortress when dismissed anywhere outside.

You also get Kagrenac's Ring of Return. Equip the ring to travel inside the fortress, unequip it to travel back.
(Note: Go easy on the ring, make sure areas get time to load properly before teleporting in or out otherwise it can glitch. It really doesn't like cities, city interiors are fine, just don't use it inside the "world" cells.)

The fortress, once deployed, has a map marker.

None of the storage containers are set to respawn.

There is no Autosave when entering and leaving the fortress.

Now contains a bard npc / music box. If she glitches just turn it off and on again. Also, before I'm asked, the second song button won't work until you've completed the main quest.


Find Kagrenac's Ring of Return in the north east of the map. It is east of Windhelm, on a small beach just north of the Yngol Barrow back door and south of the Wreck of the Winter War, in a small pouch under a skeleton's hand. (There are two images provided.)

Equip the ring and you'll be taken inside the fortress. Activate the shutdown stand to receive the cube and ownership of all the items inside.

Once you've got the cube just select it from your inventory to make the tower appear before you.

If for any reason you can't find the ring, you can use the console:
Open Console
help "ring of return"
(Get the ID of the ring and replace the X's in the command below.)
player.additem XXXXXXXX 1

(Do not start by giving yourself a fortress cube using the console.)

Make sure your character is not moving before deploying the fortress, if you don't you might see gaps between the tower pieces. Don't deploy while jumping or falling.

Glitch during Marriage if your Spouse or a Guest is residing in the fortress. You can use the fortress shutdown stand to reset any lost residents, but I'd recommend sending them home before going to the Temple of Mara.

If you find weapon plaques aren't working on an update to a new version, wait outside for 24 hours and they should reset.

If, after using the shutdown stand, you have the cube in your inventory but the fortress external tower wasn't removed try dropping the cube and picking it up again. If that doesn't work it should still be possible to deploy the fortress again. Unfortunately you will have to manually delete the remaining pieces of the old tower (use markfordelete). Do not delete the door. Hopefully that'll get the shutdown stand functioning correctly again.

The latest version has some major changes to code that makes the mod much more stable and safe over time. The tower needs to be dismantled BEFORE updating. No fortress content is modified, just the way the tower deploy and dismantle functions.

Use a CLEAN SAVE if possible, but the mod will work if you're doing an update. Just a few things to note:

1. The fortress needs to be "shut down" / dismantled before updating. This is a problem if Steam has already downloaded the update, you'll be left with an old tower that you can't dismantle.
The only way to get rid of the old tower is to open the console and use "markfordelete" or "disable" on each of the old pieces. IDs should begin with an [ffxxxxxx]. DO NOT delete or disable the door.
(Very sorry! It shouldn't happen again with the new code as each of the tower pieces is now safely stored as a quest alias.)

2. The Ring of Return will be back in the skeleton's pouch. It is safe to use the console to get a new one: [help "ring of return"]

3. The cube might not want to work the first time you use it. Try dropping it and picking it back up again to reset the script. It's also now safe to get a new cube with the console, but don't deploy more than one: [help "instant fortress"]

4. If you find yourself stuck inside the fortess after the update just use [coc whiterun] in the console and redeploy the tower. That should get the cube stand and door working again.

1. Fixed a script reset glitch, the cube script was clearing itself out, making the tower shut down fail leaving a glitched old tower.
2. Fixed an interior reset that happened after waiting 31 in-game days.
2. Ring now works only when you put it on ... both ways.
3. Ring no longer works from city world cells, to prevent CTD glitch.
4. Ring can now be used when the fortress is shut down.
5. Added a new outfit option when hiring the cook and guards. (WARNING: This is a permanent default outfit change!)
Popular Discussions View All (1)

ZeeRo Feb 28, 2017 @ 12:40pm
by far the best player home. so detailed an so much store room for everything i love it and you can place it everywere thats the best part of it :D top mod

Wurstobier Dec 16, 2016 @ 11:22am
Amazingly well thought-out, with love for detail. Most of things that people requested on this thread are already built-in (garden/plants, books with lore regarding the fortress, etc).

Warning: there is a little too much high-level stuff in the fortress. Other than that I would recommend making this the first thing you get.

The only thing that I consider sub-optimal is the lighting on the book shelves. But considering the amount of love and detail the rest of this got, that is pretty much irrelevant (and also easily fixed using Magelight).
Though as well thought-out as this is, I keep feeling that I am missing a light-switch somewhere!

Tenebraxis Dec 8, 2016 @ 2:28pm
works great on the skyrim mainland, but does not seem to work at all on solstheim, any clues?

Koya Stryker Sep 29, 2016 @ 12:22am
i downloaded this mod and use the commands to try and give me the ring and it didnt work. please tell me what im doing wrong. i put help ring of return and nothing happened.

DeamonLamma Sep 18, 2016 @ 9:24pm
I love this mod soooo much, but its a realy shame it hasnt been updated with some of the Hearth Fire DLC content like a garden to grow herbs and soem more displays