Store Page
Garry's Mod>  Workshop > Detective Sour Pants's Workshop
This item has been removed from the community because it violates Steam Community & Content Guidelines. It is only visible to you. If you believe your item has been removed by mistake, please contact Steam Support.
This item is incompatible with Garry's Mod. Please see the instructions page for reasons why this item might not work within Garry's Mod.
Current visibility: Hidden
This item will only be visible to you, admins, and anyone marked as a creator.
Current visibility: Friends-only
This item will only be visible in searches to you, your friends, and admins. 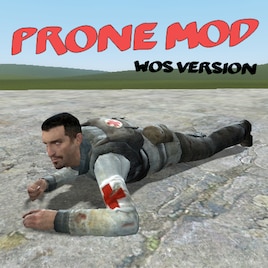 This item has been added to your Subscriptions. Some games will require you to relaunch them before the item will be downloaded.
In 1 collection by Detective Sour Pants
Prone Mod wOS Requirements

3 items
Description
Give those tired legs a break and go prone!

Note: This version of the addon requires wOS - Base Extension and wOS - Prone Mod Extension to work.

Note: This addon may cause some NPCs to glitch into prone animations at random times. Currently this issue is known but will not be addressed until a proper solution is found.

How do I install this?
How do I go prone?
How do I change what key it is to go prone?
Model X doesn't work properly with the Prone Mod, what can I do?
I see a config menu in the images above, how do I access it?
How does this work with Clockwork, Nutscript, or Helix?
Do I need to use wOS for this addon to work?
My view while prone keeps bouncing/I can prone really fast/I can jump while prone/etc
The addon doesn't work!
I'm a lua developer, does your addon have an API?
I'm making my own animations base, how do I add support for your Prone Mod?
I have another problem not covered here, where should I ask?
Console Commands:
prone -- Lets you go in and out of prone. prone_config -- Opens up a menu to change what keys make you go prone. prone_movespeed -- Sets the move speed of the players while prone (Server only). prone_disabletransitions -- Disables view transitions between prone get up/down.
Github Link - https://github.com/gspetrou/Prone-Mod
Stalker - Responsible for the Lua code. Contact him for support.
Stiffy360 - Responsible for porting and tweaking the animations. DO NOT contact him for support.

Don't forget to leave an honest comment or rating!
Popular Discussions View All (16)

DalekCraft Jul 27 @ 9:03am
When I go prone, I go under the floor, and then stand up with prone speed. When I exit prone, I rise up above normal height, and then go down again with normal speed.

Gurra 6374 Jul 21 @ 5:09am
Evertime i prone with third person and first person on first its look like i not prone but i go slow and the third evetime i prone i stand up and sorry about the words i am not good on enlish

𝓵𝓮𝓸𝓷𝓪𝓻𝓭𝓸 Jul 10 @ 5:47am
Would of been cool to have an option that takes you to tpp when in prone

Detective Sour Pants  [author] Jun 30 @ 5:08pm
@Ursine, it is known that this addon sometimes messes with some NPCs, unfortunately there is no known fix for now.