Greenlight > Games > D'Avekki Studios's Workshop
Greenlight is being retired. For more information on how to submit games to steam, refer to this blog post.
This item has been removed from the community because it violates Steam Community & Content Guidelines. It is only visible to you. If you believe your item has been removed by mistake, please contact Steam Support.
This item is incompatible with Greenlight. Please see the instructions page for reasons why this item might not work within Greenlight.
Current visibility: Hidden
This item will only be visible to you, admins, and anyone marked as a creator.
Current visibility: Friends-only
This item will only be visible in searches to you, your friends, and admins.
The Infectious Madness of Doctor Dekker
Description Discussions0 Announcements5 Comments96 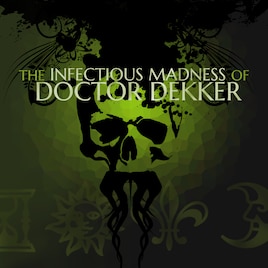 D'Avekki Studios
Offline
See all 7 collections (some may be hidden)

View The Infectious Madness of Doctor Dekker in the store

Thank you for your patients ;-) The Infectious Madness of Doctor Dekker is releasing on the Steam store on the 19th May. Head over to the new store page to add us to wishlist, and begin telling your friends how you'll get the best endings (or worst), and find the easter eggs. Maybe ;-)

Our beta test finishes this Friday to pave the way for our full release!

We'd like to say a big thank you to everyone who has helped test and improve the game!!! The biggest eye-opener was finding out most players wanted to unlock every single available video response, so we've had to make lots of adjustments to help with this, and that in turn has ended up pushing the release date further back than we'd have liked.

The official release date will be available on our Steam store page when we publish it in the next week or two, but if you pencil out a few days/weeks in May you shouldn't be far wrong...

In other news, we've just submitted trading card assets for approval along with badges, backgrounds and emoticons too - and have added several more Steam achievements for your playing pleasure :-)

Read More
Description
Release date: Q1 2017
OVERVIEW
YOU are a psychiatrist, trying to solve a murder whilst treating the unusual patients of the recently deceased Doctor Dekker - but nothing is as it seems.

Type any question - and your patients will reply in full screen video.

They'll have questions for you too but be careful what you say. Your words will determine their eventual fates, and your own!

FULL DETAILS
The Infectious Madness of Doctor Dekker is a Lovecraftian FMV murder mystery, which gives players full freedom to question suspects by typing their own questions instead of picking them from a predetermined list. There are no point and click puzzles to solve, just questions to ask and evidence to inspect.

Finding out who killed Dr Dekker is only one part of the puzzle; working out how to fix the chaos he left behind will be so much trickier… As well as providing clues to the murder, each patient has their own bizarre problem they need your help with – from time manipulation and re-animated loved ones to horrors under the sea.

Complete with an atmospheric soundtrack, The Infectious Madness of Doctor Dekker invites you to explore the shadow reality that your patients inhabit – a world full of paranormal strangeness and horrors that go bump in your head, where all you have to rely on is your own mind.

FAQ
How do you progress through the game?
You play through a series of five therapy sessions. Each session you'll talk to several patients, and traffic lights tell you which patients you've unlocked so you can move on. Yellow is unlocked, but you can keep talking to reach green and find all their possible responses. On the final accusation screen you choose whodunit and if you've picked correctly the game finishes and plays your ending videos. Automatic saves mean there's no way to rollback something you've said to a patient, so be careful with that. That's it in a nutshell, but we can't tell you everything, or there'd be no surprises...

What happens if I ask a question they don't have an answer for?
As long-time fans of FMV games and point-and-click adventures, we're all-too familiar with the 'That's not gonna work' or 'I think I'll have to try that again' phrases repeated over and over. That's why we've given the patients lots of different ways of saying "I don't know" - most have over 40 in fact, including some that contain clues that lead you to new storylines.

What if I get stuck?
We've tried to design the game so you don't get stuck, but if you can't figure out what else to ask, just wait a few minutes for the hint system to kick in. That should point you in the right direction.

If the murderer is chosen at random, does that mean it's replayable?
The game can be replayed, but it wasn't designed with that in mind. We wanted everyone to be able to experience as much of the game as possible without needing multiple plays, so branching generally removes just a few responses at a time. That said, you will have to replay the game if you want to find *all* the videos and unlock all the achievements and endings.

D'Avekki Studios  [author] Nov 7, 2016 @ 4:21am
Thanks @aullik - and agreed :-) We won't release until we think it's ready. Content will be there, and hoping the beta testers will help us out with any stability issues. We will be ready to patch though to make sure it works on as many machines as possible, if required.

aullik Nov 6, 2016 @ 8:47am
@doctordekker We Players rather wait another month or two then having to play an unfinshed game. So if you need more time feel free to take it!

D'Avekki Studios  [author] Nov 5, 2016 @ 5:44am
Thanks all! HellCow - we're picking testers from people who have signed up on our website, so add your email and we'll be in touch. Beta is imminent. Hoping for December release but might be delayed pending beta results...
< >

The Infectious Madness of Doctor Dekker has been Greenlit and is now listed in the Steam store. For the latest information, purchase options, and discussions for The Infectious Madness of Doctor Dekker, please see it on the Steam Store or in the Steam Community.
Visit Store Page
For more details Visit Community Hub
For latest discussions
If you really, really want to, you can continue to the Greenlight page. Information on this page may be out of date, since all the action has moved to the areas noted above.