Greenlight > Games > Quarx's Workshop
Greenlight is being retired. For more information on how to submit games to steam, refer to this blog post.
This item has been removed from the community because it violates Steam Community & Content Guidelines. It is only visible to you. If you believe your item has been removed by mistake, please contact Steam Support.
This item is incompatible with Greenlight. Please see the instructions page for reasons why this item might not work within Greenlight.
Current visibility: Hidden
This item will only be visible to you, admins, and anyone marked as a creator.
Current visibility: Friends-only
This item will only be visible in searches to you, your friends, and admins.
Steel Empire
Description Discussions3 Announcements3 Comments59 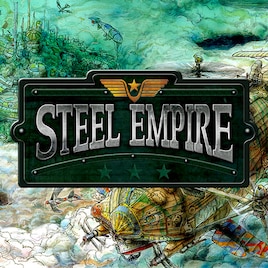 View Steel Empire in the store

Finally after months of development and testing we are proud to share the news that Steel Empire is out today on Steam (8:00am PDT/5:00pm CET). To celebrate the release we are offering a launch discount of 33% for the first week of sales! :) After that the regular price will be $14.99.

Visit the game page at Steam: https://store.steampowered.com/app/563260/Steel_Empire
Check out the trailer here: https://www.youtube.com/watch?v=WmU4Dmvco-E

Thank you to everyone who supported the game on Greenlight! Enjoy :)

A huge THANK YOU to all our supporters who helped us make our way to Steam!

Now together with Mebius, the Japanese developer, we will continue working on the title to bring it as soon as possible to the service. We're looking forward to a release in Q1 2017 :) Stay tuned!

For more progress updates on the game check our social media:

Steel Empire is a steam punk shoot'em up game featuring a frantic combat filled with powerful enemies and insane obstacles. Enjoy a beautiful world and retro game-play as you dodge and shoot your way through classical stages. Choose one of 4 difficulty settings according to your set of skills and fight the evil empire! See how well you did using the Replay Mode and show your worth by getting all achievements.

Originally released on the Sega Genesis / Mega Drive consoles in 1992, it was later ported to the Nintendo Game Boy Advance in 2004 and to the Nintendo 3DS in 2014, and now is coming to PC!

Choose to fly one of two classes of fighter aircraft: the Striker, a small and a fast plane, or the Z-01, a slower but more resistant zeppelin. You fly in only one direction, but you can fire from behind as well as ahead. Levels are divided into a few stages to complete, each with their own boss before moving onto the next level. After a level is complete, you can change your craft, watch a replay, continue the game in your current craft, or save your progress.

During the game there is a certain number of lives and continues at your disposal. Once the health bar is depleted, a life is lost with a play continuing normally. If all lives are used, you can hit a continue, which will restart at either the beginning or midpoint of a stage depending on how far you were. When all continues are expended, the game is over.

To increase your firepower, collect powerups such as experience points, health or additional lives.

Originally posted by 3DSpedia.com:
"Amazing gameplay, great replay value, excellent remastering work and a premium presentation is the best way to define Steel Empire, where I can easily recommend it to any fan of the genre.”

Originally posted by MyGamer.com:
"I honestly have not had this much fun with a 2D shooter in a long time."

Originally posted by Destructoid.com:
"In terms of its presentation, Teyon has lifted the game perfectly from its source material. It looks, sounds, and feels great."

Originally posted by WiisWorld.com:
"It's undoubtedly a well-crafted game that any fan of this genre should give a shot."

Originally posted by PureNintendo.com:
"Steel Empire makes for a highly entertaining 3DS download! (…) consider this a must buy for shooter fans!"

Questions about the game.
Birm

TheCoopX Jul 28, 2017 @ 1:37pm
It took a while to get a response from them, but Teyon replied... "Hi there! Sorry for a delay in getting back to you, but our support here on Facebook had a vacation break ;) The Japanese developer is working on an English build for us. They have a few ongoing development projects causing a delay, but hopefully they will wrap the development soon. All updates on the game will be posted here on our FB profile :) Have a nice day!"

TheCoopX Jul 15, 2017 @ 1:28pm
I have the sinking feeling that this has been cancelled. It's been close to eight months since it was greenlit and there hasn't been any new info about the Steam release anywhere :(

Party_Mark Nov 9, 2016 @ 5:49pm
Get it on steam! Really want to play this with a proper arcade stick and not cramped 3ds controls!

Steel Empire has been Greenlit and is now listed in the Steam store. For the latest information, purchase options, and discussions for Steel Empire, please see it on the Steam Store or in the Steam Community.
Visit Store Page
For more details Visit Community Hub
For latest discussions
If you really, really want to, you can continue to the Greenlight page. Information on this page may be out of date, since all the action has moved to the areas noted above.