Greenlight > Games > dreamwagon's Workshop
Greenlight is being retired. For more information on how to submit games to steam, refer to this blog post.
This item has been removed from the community because it violates Steam Community & Content Guidelines. It is only visible to you. If you believe your item has been removed by mistake, please contact Steam Support.
This item is incompatible with Greenlight. Please see the instructions page for reasons why this item might not work within Greenlight.
Current visibility: Hidden
This item will only be visible to you, admins, and anyone marked as a creator.
Current visibility: Friends-only
This item will only be visible in searches to you, your friends, and admins.
Diox
Description Discussions0 Comments43 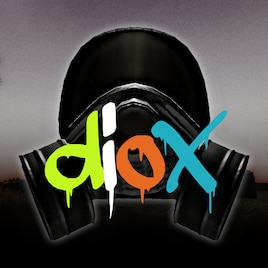 dreamwagon
Offline
See all 4 collections (some may be hidden)
Description
Release date: Winter 2017

Diox is a first and third person RPG shooter set in the near future. The earth has been altered by a dramatic climate change. Sea levels have risen, making the air too toxic to breathe and the water unsafe to venture into. In order to survive in this environment, you will need to acquire or craft tools, build shelter, learn skills and scavenge for technological relics to repair.

Diox is about exploration, scavenging, construction, repairing, crafting, and discovery. Unlike many survival/crafting games that force a predefined path to acquire items with limited uses, Diox allows players to repair or construct a wide variety of basic and complex items from prefabricated parts commonly found in and around the cities that have been left in ruin. Where mighty cities once stood, there is a vast treasure of machinery, industry, arms and robotics. The challenge lies in finding these artifacts and advancing the technology at your disposal.

Through character progression and customization, exploring, and crafting, there are endless possibilities for developing a powerful character.

Rokün began as simple nameless robotic helpers: vacuum cleaners, drones, assistants, even the simple robotic machinery that bottled soda and assembled cars. As time passed, the Rokün became more and more omnipresent as humans began to rely on them for every chore. One of the ways to convert raw resources into building materials and crafting parts is to craft a Rokün. These semi-sentient robots can be your best friend or worst enemy. Like the human race, the Rokün were largely affected by the rapid climate change. Fully intact Rokün and many of their functional parts can still be found in varying degrees of quality and rarity.

The Rokün are central to gameplay. The character must find parts to craft Rokün. Once found and/or crafted, your Rokün will create building materials from raw resources gathered by the player. Your Rokün may also act as a scout, a construction assistant, and a carrier for your small items and building plans.

Cross Platform by Design
We are committed to supporting Windows, Linux, and Mac operating systems, and with that in mind, we have worked continuously to support these platforms as we build and test Diox. We strive to create a game with graphics and appearance that are both modern yet flexible enough to accommodate commodity graphics hardware.

dreamwagon  [author] Nov 22, 2016 @ 8:47am
@battlesoupe There will be a few different camera views. The 3rd person zoomed out view is only when building. The combat 3rd person view will be more zoomed in as you have suggested

@Burak Yougun Thanks for your suggestion. We will support as many languages as possible on alpha release.
< >