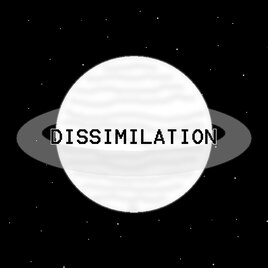 Fivesyounger
Offline
See the collection (may be hidden)
Thanks for your support!

There is now an official Dissimilation group.

Check it out below:
http://steamcommunity.com/groups/dissimilation

Join for a chance to enter the beta!

Thanks for all the support so far!

Branding image has been re-made to better represent the game.

Thanks for all the support so far!

Read More
Description
Release date: Early 2017
Take control of a ship of your choice and explore a randomly generated galaxy in Dissimilation!

About this game:
Dissimilation is a top down, retro styled shooter set in a randomly generated galaxy. Dock at space stations and land on randomly generated planets, populated by alien flora and fauna.
Upgrade your ship by buying new weapons and armor, or craft them yourself! The upgrades will be vital in fighting off pirates, androids and even the galactic police force!
Attack elite Capital ships in brutal space battles to board the wreckage and kill the captain.
Slaughter the inhabitants of a colony or space station at your own risk – the structure may come under siege by galactic police.

Key Features:
Randomly Generated Galaxy
Space stations, planets and nebula are all randomly generated to provide a unique gameplay experience for each user.

Exploration
A key element of Dissimilation is exploration. You can land on nearly every planet to explore its surface. Each planet will be unique with its own weather, plants and wildlife. Some will be nothing more than an arid, barren wasteland, devoid of any natural life. Some may be lush, with a climate similar to the Earth's. Depending on these conditions, the human structures will change. The more barren planets may only have a single research station or mining colony. The more picturesque planets will likely be popular galactic tourist destinations.

Resource collection
To acquire resources, you must mine asteroids or natural structures on planets. The yield of the planet’s structures is strongly influenced by various conditions on the planet, particularly the chemical makeup of the crust. However, Dissimilation is specifically designed to give players the maximum amount of freedom. It is therefore possible to play the game without collecting a single mineral or touching a crafting table.

Loot System
A variety of containers and other items of interests are randomly generated on each planet’s surface. Venturing out from the colonies and research stations is often rewarded by finding crashed escape pods or old cargo containers. There structures may contain valuable items or credits to aid you on your journey.

Ship Upgrades
There are a huge variety of upgrades for your ship. There upgrades range from simply installing larger fuel tanks in order to explore for longer durations of time, to increasing power to the laser cannons for a higher intensity attack.

Fivesyounger  [author] Sep 30, 2016 @ 4:07pm
@Bee892 - Thanks for the vote! As for another video, I am planning on recording some gameplay to demonstrate several of the features of the game. However, with the objectives, I am keeping a secret. I don't want to spoil the story :P

@Rael - To find out the meaning of the title, you must play the game...

Bee892 Sep 30, 2016 @ 10:01am
It looks freakin' cool! I can only imagine the detail that was put into the entire game and the different world you can go to. However, I would love to see a video in addition to the one you have that sort of explains the objectives and different features of the game. I and most people on Greenlight probably aren't going to want to read if they don't have to.