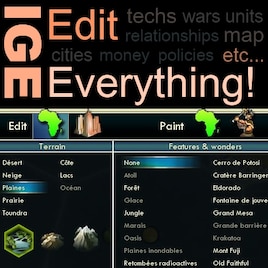 donquiche
Offline
See all 3938 collections (some may be hidden)

This item has been added to your Subscriptions. Some games will require you to relaunch them before the item will be downloaded.
Description
COMPATIBLE WITH ALL VERSIONS AND MODS.
An in-game editor to alter the map and many other things on the fly.


Crashes caused by mods stacking when reloading a savegame in-game:
- Disable mods that are no longer available on Steam such as Hulfgar's postmod expansion. Look for them on the web or on CivFanatics and perform a manual install instead.
- Happens randomly, the mods to remove differ from one user to another. No mod is at fault, only civ5 is.

Game is crashing after making changes with IGE
panzer.tc
< >
2,958 Comments

Midnight Darling ☁ Jan 13 @ 6:04am
Can you move a wonder? I hate the placement sometimes of wonders I build and is there a way I can move the location of them with this mod?

J6a6b2c Dec 10, 2021 @ 3:49am
For some reason the game crashes whenever I load mid-game or restart a run at the very beginning (loading from the title screen works normal). I've tested all mods and it seems that IGE alone is causing the crash. Is there a way to fix this?

mastercraft20 Oct 10, 2021 @ 12:41pm
Fantastic mod. Has always worked beautifully, but today when I loaded a game that had the mod and tried to use it after founding a 3rd city, the city became stuck and inaccessible after i put a resource on the same tile, and it gave me the following error:
C:/Users/fcdqu/Documents/My Games/Sid Meier's Civilization 5/MODS/Ingame Editor (v39)/BulkUI/IGE_CityBanner.Iua:172: attempt to index local 'city' (a nil value)

Touschka Oct 6, 2021 @ 9:58pm
Fantastic mod, however I cannot seem to play any of the scenarios with it (it says something about "exclusivity"). Is this normal?

limitless Oct 3, 2021 @ 9:28am
when I install this mod after then resources icon doesnt showing up.How can I fix it?

nicobeneville Sep 22, 2021 @ 1:41pm
I've an error message when this mod is active ?? R.E.D. DLL for BNW (include Revolutions and Cultural Diffusion)