Greenlight > Games > Classroom Graffiti's Workshop
Greenlight is being retired. For more information on how to submit games to steam, refer to this blog post.
This item has been removed from the community because it violates Steam Community & Content Guidelines. It is only visible to you. If you believe your item has been removed by mistake, please contact Steam Support.
This item is incompatible with Greenlight. Please see the instructions page for reasons why this item might not work within Greenlight.
Current visibility: Hidden
This item will only be visible to you, admins, and anyone marked as a creator.
Current visibility: Friends-only
This item will only be visible in searches to you, your friends, and admins.
The St Christopher's School Lockdown
Description Discussions0 Announcements9 Comments33 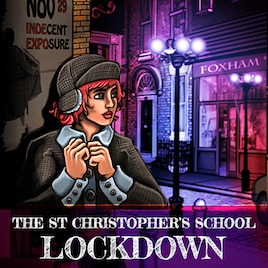 Robomoogle
Offline
See all 4 collections (some may be hidden)

View The St Christopher's School Lockdown in the store

Hi, guys. If you're confused as to why our game hasn't been released just yet, erm, we are as well, to be honest! Like we said, we've been waiting for Steam to approve our build, and we sent them the final version over ten days ago now. They told us 3-5 business days for approval, which is why we selected the date we did-- if we thought it was going to take longer, we'd have given ourselves some more space.

In any case, we're incredibly sorry about the screw-up with this, and we're hoping this can be resolved ASAP! (We're in touch with them and waiting to hear back...) In any case, in the meantime, the Itch.io builds are all up (Windows, Mac and Linux!), and the link has been posted in the previous update.

The very instant we know what's going on, we'll let you all know. We're really sorry about this, and wish we had some control over it, but it's all in Steam's godly hands now! In any case, we understand that they must have a ton of applications and builds to approve and so on... We just wish we'd known that they might exceed their stated time so that we wouldn't have ended up making promises we couldn't keep.

Our apologies, and we hope you'll bear with us while this gets sorted out. Thanks, guys!

While we are still waiting to go live on Steam (while we submitted to them roughly ten days ago, they are taking longer than promised to confirm our submission... slightly awkward, given that we promised to release today, but it's out of our hands, unfortunately), we have other news-- we are officially live on Itch.io!

This version has everything BUT Steam achievements and access to the full soundtrack purchase, so if you're feeling a bit impatient, please feel free to head on over thatta way to get your copy! We apologise for the delays here on Steam, and we're really scratching our heads as to why this is taking longer than we were informed it would, but we wanted to offer you guys an alternative, since we promised the October 9th release for everyone.

Thanks so much for bearing with us, and let's hope that our Steam page ends up going live today!

Our biggest departure from other games, however, comes from the game’s main subject: political unrest in a world of limited of options. The prestigious St. Christopher's School has been seized by its student body. Roughly two hundred teenagers (and even a few primary schoolers) have taken their own campus by storm, staging a lock-in protest against severe new financial rulings. Barricaded within the building and facing pressure from the police, the government and the media, the young St. Christopher's crusaders are going to find out how quickly things can go from bad to worse.

The first episode follows Kayleigh, an outsider to St. Chris. Due to delicate circumstances involving debt, blackmail and robbery, she finds herself seeking refuge within the school. However, she soon comes to realize that she might have been better off outside.

It wouldn't be a point-and-click adventure game without puzzles, and the puzzles in The St. Christopher's school lock down are being designed with multiple solutions. We know first hand how frustrating it can be to try to guess the esoteric item combination solution the developer is pushing for, and believe that by having a few approaches to each puzzle gamers will avoided dreaded unsolveable dead-ends.

Beyond the puzzles, the game will be filled with a vast variety of minigames, including two recurring ones. One of them is a game you will play against other students at the school, in the form of a trading voodoo doll battle game. The other is mood-balancing card matching game; as Kayleigh deals with the ongoing struggles of the school and her mood edges into either mania or depression, it has negative effects on the gameplay. With the card game, you are given a phrase, and you need to pick a response in the mood you want for Kayleigh.

We've estimated the final product will have around eight hours of gameplay-- some of these puzzles are rather tricky, and you will want to do a lot of exploring to learn what, exactly, is going on behind the scenes within the school... particularly since you will need to choose a side to support!

Episode 1 of The St. Christopher's School Lockdown is on track to release in the summer of 2017 for PC, Mac, and Linux.
< >
33 Comments

Classroom Graffiti  [author] May 29, 2017 @ 4:35pm
Exactly! And in the future, the episodes will be so much bloody easier, since we have all of the basic assets and framework we need for the series in place. Thanks for your understanding!!

intk May 29, 2017 @ 4:31pm
You can ask forgiveness for delays but you won't be forgiven if you released an episodic game with bugs. Take all the time you need. The game is going to be awesome.

Classroom Graffiti  [author] May 29, 2017 @ 5:55am
Hi, Intk-- yes, unfortunately! This was due to scheduling conflicts regarding the voice production team we'll be working with (who are in London, whereas I'm up in Scotland) and financial issues, and, honestly, we are finding quite a few more bugs than we expected..!! We really want to make sure that this game is in solid shape before it's released, but don't worry, we have been beta testing like crazy. If you'd be interested in participating, feel free to message me. :)

The St Christopher's School Lockdown has been Greenlit and is now listed in the Steam store. For the latest information, purchase options, and discussions for The St Christopher's School Lockdown, please see it on the Steam Store or in the Steam Community.
Visit Store Page
For more details Visit Community Hub
For latest discussions
If you really, really want to, you can continue to the Greenlight page. Information on this page may be out of date, since all the action has moved to the areas noted above.