Greenlight > Games > Abigail's Workshop
Greenlight is being retired. For more information on how to submit games to steam, refer to this blog post.
This item has been removed from the community because it violates Steam Community & Content Guidelines. It is only visible to you. If you believe your item has been removed by mistake, please contact Steam Support.
This item is incompatible with Greenlight. Please see the instructions page for reasons why this item might not work within Greenlight.
Current visibility: Hidden
This item will only be visible to you, admins, and anyone marked as a creator.
Current visibility: Friends-only
This item will only be visible in searches to you, your friends, and admins.
Open Sorcery
Description Discussions1 Announcements10 Comments53 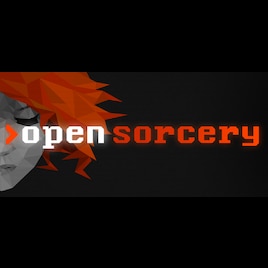 Abigail
Offline
See the collection (may be hidden)

View Open Sorcery in the store

OS is beta tested and fixed up.

Now I'm porting it to all the systems I want it to run on. My advertising lady Julia Salvati is figuring out advertising things.

I ended up not putting in a couple of things I was originally planning on. The combos I mentioned a while ago felt very superficial, so I left them out.

And while I tried writing it a few times, Janet and Sarah just really weren't interested in becoming friends.

Toby and Pyreworm, on the other hand, are TIGHT.

The Open Sorcery LARP at Glimmerdark was tiny (we were competing with room parties) but LOTS of fun and I'm looking forward to the second draft at Dreamation.

Set your computer on fire.

Most of the beta testing results are in.

Most people seem pleased with the additions. There are functional issues that I'm fixing now.

Now that I've ironed out the Steam Page, I feel comfortable setting the release date for the Steam game.

I'm planning to put it out on February 22nd.

So all you have to remember is 2.

Open Sorcery is text-based. It follows the development of an elemental firewall. A creature of magical fire bound by C++ code.

In this game you can:

There are 90,000 words of text, five animated sequences, eighteen achievements to pursue, and eight possible endings.
Popular Discussions View All (1)

I ONLY send out mail when I have made new games. I'm very strict about that. You will get no spam. :)

bobbananaville Dec 25, 2016 @ 10:32pm
I don't suppose I could preorder it? Or alternatively, is there a website I could subscribe my email to for updates?
Because I loved the web version, don't have any money on my ios account with which I could buy the ios version, and don't want to forget to buy this when it finally releases (and I KNOW it will).

HellCow Nov 5, 2016 @ 8:43am
Hey, i woud like to promote your game or to test the game.
Also i can get some testers if necesary, Add me if interested in steam or send me a mail: Liecis19@gmail.com

vatavian Nov 2, 2016 @ 2:52am
SPOILER WARNING: Only follow this link if you are finished playing: Here are my notes [drive.google.com] from searching for how to save everyone, including Andy, on the Android version.

vatavian Oct 30, 2016 @ 8:14pm
I really enjoyed this on the web, then bought the Android version. Definitely interested in anything new in the Steam version. I have two pages of notes I took in my quest to reach my favorite ending.

Open Sorcery has been Greenlit and is now listed in the Steam store. For the latest information, purchase options, and discussions for Open Sorcery, please see it on the Steam Store or in the Steam Community.
Visit Store Page
For more details Visit Community Hub
For latest discussions
If you really, really want to, you can continue to the Greenlight page. Information on this page may be out of date, since all the action has moved to the areas noted above.