Greenlight > Games > Cloud Castle's Workshop
Greenlight is being retired. For more information on how to submit games to steam, refer to this blog post.
This item has been removed from the community because it violates Steam Community & Content Guidelines. It is only visible to you. If you believe your item has been removed by mistake, please contact Steam Support.
This item is incompatible with Greenlight. Please see the instructions page for reasons why this item might not work within Greenlight.
Current visibility: Hidden
This item will only be visible to you, admins, and anyone marked as a creator.
Current visibility: Friends-only
This item will only be visible in searches to you, your friends, and admins.
Die With Glory
Description Discussions5 Announcements3 Comments226 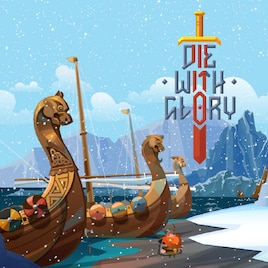 Cloud Castle
Offline
See all 14 collections (some may be hidden)

View Die With Glory in the store

The time has come!
Proceed to diewithglory.com and sign up for the closed beta! Die With Glory is an action packed adventure game with a rich, non-linear storyline where your ultimate goal is to die.

Sigurd is the old viking who has been a warrior all his life and has never lost in battle. Now he’s ready to die with glory and go to Valhalla.

Travel through beautiful landscapes in a search of a worthy foe who will be able to defeat you and grant you an honorable death. Try every deadly peril to test your viking warrior strength, and don’t give up until you find a way to die with glory and go through the Valhalla Gates.

Explore a tiny yet diversified world, face hardest challenges, meet new characters, and fight with unique weapons.
It is up to you to choose your path, define your own game world, and determine Sigurd’s destiny.

Die with Glory empowers you to choose your own adventure to accomplish the ultimate goal of ensuring Sigurd dies an honorable death.

Our main goal is to present a unique experience at every stage of the game, still based on simple core gameplay mechanics. To die with glory you have to face the obstacles, characters and game physics below to reach your goals:

Blayne Jan 14, 2017 @ 1:28pm
Is there any possibility of a review copy of this game? I could give some great feedback and an honest review with praise where its due and constructive criticism.

Die With Glory has been Greenlit and is now listed in the Steam store. For the latest information, purchase options, and discussions for Die With Glory, please see it on the Steam Store or in the Steam Community.
Visit Store Page
For more details Visit Community Hub
For latest discussions
If you really, really want to, you can continue to the Greenlight page. Information on this page may be out of date, since all the action has moved to the areas noted above.