Greenlight > Games > TheWzzard's Workshop
Greenlight is being retired. For more information on how to submit games to steam, refer to this blog post.
This item has been removed from the community because it violates Steam Community & Content Guidelines. It is only visible to you. If you believe your item has been removed by mistake, please contact Steam Support.
This item is incompatible with Greenlight. Please see the instructions page for reasons why this item might not work within Greenlight.
Current visibility: Hidden
This item will only be visible to you, admins, and anyone marked as a creator.
Current visibility: Friends-only
This item will only be visible in searches to you, your friends, and admins.
Ruby & Majesty: Treasure Team
Description Discussions1 Announcements3 Comments22 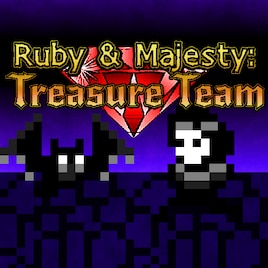 TheWzzard
Offline
See the collection (may be hidden)

I’ve been developing and funding Ruby & Majesty: Treasure Team on my own and it's a lot for one person and an incredibly cute cat to handle. I am planning on expanding the sound design, further revising the levels, cleaning up the editor user interface, and adding post game challenge content too so part of the funds will go towards some much needed outside assistance with art and quality assurance.

I am so excited about all the content I’ve already created for this game but it really only scratches the surface of what the contraptions, characters, engine, and editor can do. I would love to continue to expand the game after release with lots of new content. By supporting this project now you can help make that happen.

Please pledge and spread the word! There are a limited number of $10 slots available which is an absolute steal for the game!

There was no build posted last week so this is a big UPDATE!
Episode 2 is coming along! I have totally replaced many of the initial puzzles and I have added some neat new mechanics.
WARNING: Your Episode 1 save may not load correctly because the layout has changed a little bit.

"In a fractured world two friends must work together to uncover ancient treasure and the secrets of their world."

Inspired by The Lost Vikings, Brothers: A Tale of Two Sons, Escape Goat, and The Legend of Zelda, Ruby & Majesty: Treasure Team is a top down dual control action puzzle game. Players solve action based puzzles by coordinating two distinct characters, each with their own capabilities. Ruby the Person and Majesty the Bat, aka Treasure Team, must navigate strange environments in search of treasure and the secrets of their world.

Play single player and control both characters simultaneously or coordinate on the couch with local co-op. Solve fiendish puzzles by pushing blocks, carrying keys, dodging projectiles, fleeing enemies, and always abiding by the Treasure Team motto: PRESS ALL THE BUTTONS!

HellCow (DannyDOA) Nov 5, 2016 @ 10:17am
Hey, i woud like to promote your game or to test the game.
Also i can get some testers if necesary, Add me if interested in steam or send me a mail: Liecis19@gmail.com

Indie Advertisers Oct 14, 2016 @ 7:32am
Hi, I'm the manager of the Greenlight's Best Games steam group, we do daily showcases of the best Greenlight games, and would love to feature yours. If you wish to be featured, message me on Steam so I can get more information about your game! I look forward to hearing back from you!

Ruby & Majesty: Treasure Team has been Greenlit and is now listed in the Steam store. For the latest information, purchase options, and discussions for Ruby & Majesty: Treasure Team, please see it on the Steam Store or in the Steam Community.
Visit Store Page
For more details Visit Community Hub
For latest discussions
If you really, really want to, you can continue to the Greenlight page. Information on this page may be out of date, since all the action has moved to the areas noted above.