Greenlight > Games > OMGWTF Games's Workshop
Greenlight is being retired. For more information on how to submit games to steam, refer to this blog post.
This item has been removed from the community because it violates Steam Community & Content Guidelines. It is only visible to you. If you believe your item has been removed by mistake, please contact Steam Support.
This item is incompatible with Greenlight. Please see the instructions page for reasons why this item might not work within Greenlight.
Current visibility: Hidden
This item will only be visible to you, admins, and anyone marked as a creator.
Current visibility: Friends-only
This item will only be visible in searches to you, your friends, and admins.
Adaeus: Rogue Planet
Description Discussions1 Announcements3 Comments67 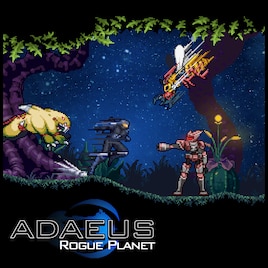 OMGWTF Games
Offline
See all 8 collections (some may be hidden)
Recent Announcements View All (3)
We have gotten the greenlight!
November 8, 2016 - OMGWTF Games

Thanks to you all, we have been greenlit and it only took us 10 days to do so! We're super appreciative of each and every yes vote we got, and we'd like to thank all that voted for us.

We've got one more feature to flesh out completely (the map system) before we release this into the wild in Early Access format. We hope that some of you will join us in Early Access, tell us what you do and don't like, what you think works well and what needs improvement before we call it finished.

Also during the course of Early Access we will be adding more enemies/bosses, music/sound effects, and more shit to get you dead in game. The money raised via Early Access will be put directly back into the game to foot the bill for extra enemies, animations and artwork in general (that stuff is expensive).

So once again, THANK YOU, and we will see you shortly in Early Access format!

We'd just like a moment to thank all of those who have voted for us. Because of your efforts, we are 33% of the way to the top 100 in just our first day of being on Greenlight!

Thank you, we are enjoying your questions and we hope to keep going strong!

Read More
Description
Play as Darius Cayne in Adaeus: Rogue Planet, a 2D sci-fi Metroidvania roguelike platformer with an emphasis on RPG elements and tight platforming action. Investigate the appearance of a new power source in order to save your colony. Customize your attacks with mod chips, solve environmental puzzles, brave challenge rooms, and uncover the secrets of the rogue planet, Adaeus.

Key Features:
Inspired by the Castlevania franchise and 2015’s indie hit Axiom Verge, Adaeus will have you explore a world where even the plants are deadly -- and menacing monsters lie in waiting at every turn. Can you survive long enough to uncover the secrets of Adaeus?

The Story So Far
Cut off from the rest of galactic civilization, Adaeus is a bloodthirsty planet filled with dangerous fauna, environmental hazards, and limited natural resources. Darius Cayne, an accomplished militiaman, has been tasked with investigating a new power source that could save his dying colony; however, what he finds is beyond anything he could’ve ever imagined. Equipped with his high-tech power suit and blaster, Cayne must hack, slash, and shoot his way through Adaeus’ unrelenting environments to make it back home and save his colony.

Gameplay
To even the odds, the hero in Adaeus has access to an advanced (and upgradeable) research lab. Use Nanites scattered around the levels -- and Credits -- to modify the suit and upgrade your equipment. Featuring more than 50 different upgrades -- everything from increasing health and strength to increasing the amount of ordnance you can carry -- the suit is the perfect tool to face the many dangers of Adaeus.

The game includes a number of brutal enemies, such as:
Be ready for a fight at the end of each level. Adaeus includes end-level bosses -- including the massive Noxious Plant that shoots Dracaenikes whenever it’s damaged. Furthermore, each level is randomized -- ensuring that no two playthroughs will ever be the same.
< >
67 Comments