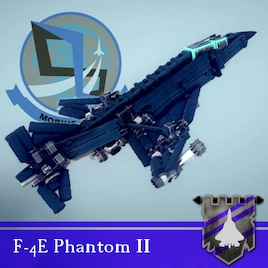 The F-4E Phantom II is a dual-seat multirole fighter aircraft created by the former McDonnell Douglas.

As requested by... damn I lost the name again.
It was a long time ago, he probably already forgot it too XD

In Ace Combat, the F-4E was the starting plane on almost every game, employed as a carrier-based fighter by several militaries, including the Independent States Allied Forces and the Aurelian Navy. Other countries, such as Belka and the Osean Federation, fielded them instead as conventional air force aircraft.

After the last machine that lags too much, I build another plane while trying to keep the block count as low as possible.

I first thought it was just a straightforward builds, turns out the Phantom has quite an unusual control surfaces. They didn't just use a simple aileron and elevator, the real plane uses too many combination of steering: drooping ailerons, spoiler panels, slats, all-moving tail and a normal rudder; and of course I have to recreate them all.

At 184 blocks, it fit the bounding box, with its four missiles has massive payload and superior range make it effective in both aerial and ground combat.

EDIT.19.Sep Improved engine, resulting in faster speed and acceleration by a lot; as suggested by ❅AιмBσт.
< >
61 Comments

Shadé  [author] Feb 3, 2020 @ 6:07pm
I made that myself.
Unpublished and have not been ported to work on the most recent version of besiege