Store Page
Starbound>  Workshop > Travelling Merchant's Workshop
This item has been removed from the community because it violates Steam Community & Content Guidelines. It is only visible to you. If you believe your item has been removed by mistake, please contact Steam Support.
This item is incompatible with Starbound. Please see the instructions page for reasons why this item might not work within Starbound.
Current visibility: Hidden
This item will only be visible to you, admins, and anyone marked as a creator.
Current visibility: Friends-only
This item will only be visible in searches to you, your friends, and admins. 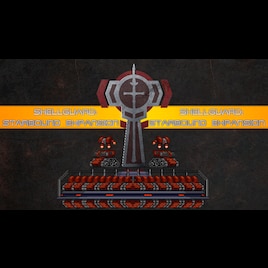 This item has been added to your Subscriptions. Some games will require you to relaunch them before the item will be downloaded.
In 1 collection by Travelling Merchant
here

87 items
Description
THIS MOD IS OUTDATED. A NEW VERSION CAN BE FOUND HERE: https://steamcommunity.com/sharedfiles/filedetails/?id=1563376005&searchtext=shellguard

WITH A NEW DISCORD HERE: https://discord.gg/PXTa4Wq

The Shellguard weapon manufacturing organisation brings many brand new firearms to this section of space, for any race to use!
Shellguard weapons use high calibre kinetic rounds that constantly emit a field of intense heat that burns up the air as they fly. This creates an intimidating tracer, as well as causes anything it hits to burn or melt. The Shellguard hybrid rounds were designed to be effective against robots, turning their circuits to molten slag! Though this also means they have the added benefit of being able to blast through light terrain materials.

Why not browse our catalogue? Shellguard weapons are available to purchase from any anvil or above!

SG Training Rifle:
Cheap, massed produced version of the Shellguard rifle intended for training purposes. It's much less powerful than the standard rifle, but it has it's uses! Price: 3000 pixels.

SG Rifle: High powered rifle used by Shellguard knights. Trusty, hard wearing and packs a punch. Alt fire vents the heat from the round while it's still in the chamber, causing the air to ignite around you.

SG Grenade Launcher: This beautiful weapon fires tiny proximity mines that are guaranteed to last a lot longer than any other weapon out there! Standard proximity mines never last too long to be useful, so the shellguard mines can actually be used tactically!

SG Pistol: The shellguard pistol is a staple of self defence. It fires reasonably slowly, but hits hard. It's a single handed weapon that any gunslinger will love.

SG SMG: This little beast has a terrifying snarl. They fire very, very fast. These SMG's are a favourite among Shellguard drone crews as they can be used with one hand.

SG Light & Heavy Hatchets. These hatchets are common tools among Shellguard knights. Useful for all sorts! Especially for caving in skulls! Designed for speed, with the windup being significantly faster than any other axe.

SG Shield: This heavy ballistic shield keeps you safe from harm. It's basically a mobile barricade. It folds away for easy transport when not guarding. When you guard, it's side protections flare out, giving you extra cover!

SG Taser Rifle: The Taser Rifle fires a burst of electricity where you aim. Originally made for frying robots circuits, the Taser Rifle does incredibly high damage, but at the cost of massive energy usage. The more energy you have, the longer the range.

SG Spear: The iconic Shellguard Spear is a powerful tool. The cross bar lets the user attack with incredible force. It can also be charged up for a heavy eletrical hit, designed to overload robots and energy shields while causing heavy impact damage.

SG Needle Laser: The needle laser fires three hybrid round needles per shot, with a moderate energy usage. These needles home in on the closest living creature. How smart is that?

Next up are the Shellguard Robotics Divisions brand new battle robots! Buy the calling devices from any anvil and fire. Where the disposable capture pod lands, a brand new machine will appear!

Shellguard Drone Caller: This calls down our fantastic little drones. They move faster than you and can be used for scouting, or as disposable backup during a fight. They come equipped with two blasters firing SG Pistol rounds. They have good firepower, but watch out, even the smallest damage will knock a drone out of the sky!

SG Palace and surrounding slums: After earth was destroyed, Shellguard tried to take in as many people as possible, but their palaces couldn't hold as many people as needed, so they are surrounded by slums. Look for these on desert planets!

SG Floating War Factory: Look for a heavy chain anchoring this flying SG robot factory to scorched planets. This dungeon is a hard one, so you'll need to be highly equiped. Especially as there were rumours of a massive flying AI fortress being built there.

Credit to: http://steamcommunity.com/id/SyfeFireshard/ for teaching me how to mod.
Popular Discussions View All (6)

The lockjaw concept is great, but maybe change them so you don't have to hold down the mouse buttons while using them? Basically, make them more like the grappling hook where you only have to click once. I suggest this because it can be kind of hard to coordinate switching from hand to hand. As a result, I usually stick with double grappling hooks, but I'd really rather use the lockjaws because they're awesome.

I think it'd also be awesome to have access to Shellguard themed blocks, because I'd love to make my own Shellguard base or outpost, complete with the awesome turrets that are already in game. Come to think of it, Shellguard furniture would be great as well!

Thanks for the great mod, and keep up the great work!

Abrasyve Aug 3, 2019 @ 3:33am
The sgevilwalkertank thing needs fixing. It crashes on pickup of capture pod.