Greenlight > Games > CMDann's Workshop
Greenlight is being retired. For more information on how to submit games to steam, refer to this blog post.
This item has been removed from the community because it violates Steam Community & Content Guidelines. It is only visible to you. If you believe your item has been removed by mistake, please contact Steam Support.
This item is incompatible with Greenlight. Please see the instructions page for reasons why this item might not work within Greenlight.
Current visibility: Hidden
This item will only be visible to you, admins, and anyone marked as a creator.
Current visibility: Friends-only
This item will only be visible in searches to you, your friends, and admins.
Construction Safety Simulator
Description Discussions1 Announcements4 Comments54 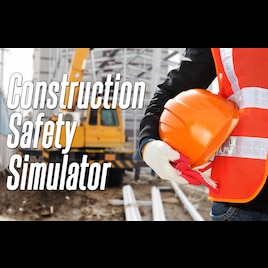 PPE System
We have been working hard on the personal protective equipment system which allows you to gear up for the job. You are expected to grab the correct PPE before doing certain tasks and you are asked by the foreman to gear up.

Inventory System
Just like you would expect on a real job site, you have to grab the right tools for the job. We have been working on a tool belt which acts as your inventory. Tools are snapped onto your belt and you can only grab so many. If you grab the wrong tools you are likely going to have a hard time working safelty.. don't hurt yourself.

Audio System
We are working on an audio system which allows us to trigger audio tracks based on time, tasks, and your performance.

Achievements
We are adding achievements to the game so as you do your job, if you do it well you are rewarded with achievements.

We just posted a new trailer to the greenlight page which shows some of the new features, a load of new tools added to the game, some of which are for different trades we are working on adding... now we just need hands!
Read More
Greenlit!
September 22, 2016 - CMDann

Thanks guys for the support, we still want to hear from you with ideas and feedback. We will be posting updated content soon so check back!

Note: This is a VR game intended for the HTC Vive and Oculus Rift

You are an aspiring supervisor with a passion for safety. You have been tasked with inspecting a job site which has been shut down for infractions. You are now responcible for inspecting, exploring, and fixing the safety issues in the game.

Features
Just like in real life you make the decissions that determine how well you do your job. If you choose to take the nail gun and shoot the tires on the truck out, or smash the windows with your hammer the world is not going to stop you. Set up or destroy the job site.

Gameplay
In the game you are able to teleport around construction sites and utilize room scale movement to interact with objects you would find on a real job site. Since the game is a sandbox game, destroy or create the scene to suite your needs.

Use the pylons to set up a safe work space or throw things around and see what would happen if an excavator drove over a propane tank.

Movement
The movement method used in this game is the teleportation method. In the video you can see how you are able to move around the site, you can of course also walk within your play area locally to move closer to an object. You are unable to teleport to obstructed areas.

Plans
The game will be developed over the course of a year, our ealy build will be available immediately which will allow you to play around with objects and explore the site. We will be adding all kinds of professions and tools to interact with.

jjgoh Jan 4, 2018 @ 6:17pm
HI, I am interested in showing this to the client in Singapore. Do contact me : jjgoh@alternatevp.com

HellCow (DannyDOA) Nov 5, 2016 @ 12:48pm
Hey, i woud like to promote your game or to test the game.
Also i can get some testers if necesary, Add me if interested in steam or send me a mail: Liecis19@gmail.com