Store Page
Besiege>  Workshop > stuChris's Workshop
This item has been removed from the community because it violates Steam Community & Content Guidelines. It is only visible to you. If you believe your item has been removed by mistake, please contact Steam Support.
This item is incompatible with Besiege. Please see the instructions page for reasons why this item might not work within Besiege.
Current visibility: Hidden
This item will only be visible to you, admins, and anyone marked as a creator.
Current visibility: Friends-only
This item will only be visible in searches to you, your friends, and admins. 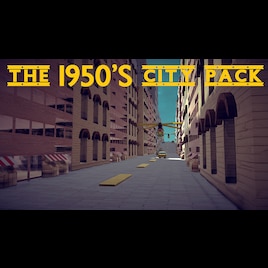 This item has been added to your Subscriptions. Some games will require you to relaunch them before the item will be downloaded.
In 1 collection by stuChris
stu's AMAZING skin packs!

4 items
Description
Now, I know what you're thinking: "Why the 50's of all times?" and I'll most definitely answer :)
at the start of the packs development this was the only city pack around, and thus this pack would have simply been the "city pack", however along the road Daichi decided to make one, and as I gave him some tips I considered, I realized that the two packs would need different names.
So I asked kindly if he would go with naming his pack the "modern city pack" and that I would go for something a little older, and he said it was ok. I chose the 50's because a lot of my favorite TV shows were set to be like the 50's, and so I thought it was a good idea, and I went with it :).

Any suggestions will be considered as long as they are on-topic! This way everyone helps to make the pack better!
And of course, have fun making your cities! Check out the main city meant for the pack here:
enjoy! and thanks to Daichi and Strydom for inspiration on certain blocks, it really motivated me!
:D
also, check out strydoms 9-block wingsuit, its great for flying through the city!
< >
20 Comments

stuChris  [author] Apr 12, 2017 @ 6:59am
well, any ideas can be taken on my profile page, but i would like to keep the comments on my machines and skinpacks open for feedback, nevertheless, thanks for your idea, i guess? maybe i will add cake to my portal pack :P

stuChris  [author] Sep 18, 2016 @ 8:11pm
i didnt make that a tag, i beleive that was because it was a collaboration with daichi, and that he made a modern pack
however, i will edit it