Store Page
Starbound>  Workshop > Heck.'s Workshop
This item has been removed from the community because it violates Steam Community & Content Guidelines. It is only visible to you. If you believe your item has been removed by mistake, please contact Steam Support.
This item is incompatible with Starbound. Please see the instructions page for reasons why this item might not work within Starbound.
Current visibility: Hidden
This item will only be visible to you, admins, and anyone marked as a creator.
Current visibility: Friends-only
This item will only be visible in searches to you, your friends, and admins. 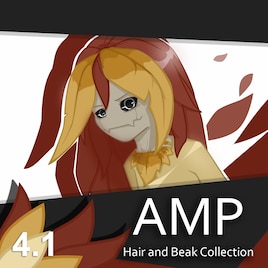 Heck.
Offline
See all 15048 collections (some may be hidden)

This item has been added to your Subscriptions. Some games will require you to relaunch them before the item will be downloaded.
Description
Compatible with Starbound 1.4 : Bounty Hunter Update

Ever wanted more variety in hairstyles without straying too far from the vanilla ones? Or maybe you just wanted to see some npcs with different hair?
Fortunately, this is just what you need.

This mod adds my current/full collection of hair/beak/facial features etc. for all races to Starbound.

Feeling inspired by the creation of other aesthetic mods (and feeling like a slight change from the vanilla ones), I set out to create my own mod which would add additional hairstyles and beaks to the races in Starbound. Having already seen an abundance of hairstyles made from our very own community, I felt that they weren't neccessarily what I was going for.

All I needed was a few new hairstyles which would compliment the vanilla ones, and fit seamlessly into the artstyle, vanity and of course, lore.
And although I had found some pretty cool looking ones, they didn't feel very... vanilla.

(The following list looks big doesn't it? Don't worry, you don't really need to look through everything. It's pretty much just a "Questions and Answers" page.)

Content
Q'nA
1. WHAT THIS MOD DOES
2. INSTALLATION
3. MULTIPLAYER
4. UNINSTALLATION
5. REQUIREMENTS
6. OTHER AWESOME MODS
7. TO DO LIST
8. THANK YOU!

Firstly, please do not copy or redistribute ANY of my mods without my permission. I'm happy to talk it out when it comes to using my mods for other purposes, but again, Inform me first!

(Not all of the beaks available are shown in this mod's thumbnail, nor is every race's hairstyles. I will be including a full visual list of all available hairstyles for each race, but until then, you'll just have to check them out in-game.)

2. HOW DO I INSTALL THIS MOD?
Just press that green 'Subscribe' button at the top of the page and you're all set!
If you want to choose one of the hairstyles/beaks for your own character, you're going to have to select it from the character creation screen when you start a new game. Unless you want to see it on npcs only of course.

3. WHAT HAPPENS IF I WANT TO PLAY MULTIPLAYER?
If you don't want friends to see bald and beakless characters, I suggest getting them to install this mod too. It won't break your game, but it will look weird for anyone who hasn't installed it.

4. WHAT IF I UNINSTALL THIS MOD AFTER PLAYING WITH A CHARACTER WHO HAS ONE OF THE HAIRS/BEAKS?
Well, just as I mentioned before, any characters or npcs with a hair/beak from this mod will appear bald/beakless (i'm pretty sure you can re-install it again to revert it back to normal though).

5. DOES THIS MOD HAVE ANY REQUIREMENTS OR OTHER CONFLICTING MODS?
Nope. Or at least it shouldn't. Let me know if you find any.
Although... there is a mod which I must recommend. Alt. Heads and Hair - Novakid. I designed the Novakid hairstyles on this mod's artstyle and haven't had the chance to see what it looks like with the vanilla artstyle. If anything, it might look a little weird without the mod, but there shouldn't be any other consequences to it.
I was going to do two different versions of Novakid hairstyles, one for Vanilla and the other for the Alt. Heads and Hair mod, but I doubt i'll get much time. I'll keep note of it in future.

6. IS THERE ANYTHING I SHOULD GET WITH THIS MOD?
Ooh, yes! If you're looking for other mods which compliment this one, check out the following:

COLOURBOUND +635
- More colours for your characters and npcs!
Just Like a Real Bird (Black Talons)
- To give your birds some tail feathers and black feet which suit the beaks! (You could also get some wings if you wanted to.)
Alt. Heads and Hair - Novakid

^ The above mods have been used in the screenshots.

ALSO,
Check out some of my other mods which includes seperate mod packs for each race! - NOTE: I won't be supporting these unfortunately. Maybe I'll update them in future. Maybe. -

Example Hair Mod - Hairstyle Modding Tutorial[community.playstarbound.com]
- Make your own hairstyles with this tutorial! Complete with template files and help along the way! - Should still be working -

7. TO DO
- Stop being lazy and finish this mod.
- Create a full visual list of hairstyles for each race.
- Make individual packs for each race. - In Progress
- Create hairstyles for all races. - Done? I'll add more in future.
- Expand upon the current set.
- Upload to the Chucklefish mod page.
- And of course, listen out for the opinions of the community! (That's you guys.)

Thank you!
Thank you to all of the community for your fantastic mods and the Developers of Starbound who made such an amazing game!
And a major thanks to you guys who use my mod. You're awesome!

Please consider rating/favoriting my mod if you can so I can get a general idea of what you guys think. :)

And as always... HAVE FUN!
Popular Discussions View All (2)

PINNED: Got a Suggestion?
Heck.

Oliver SkullDog Apr 26, 2020 @ 8:00pm
Seems whenever you play on a multiplayer server with any crew that have any of these hairs they just die instantly and keep dying

Heck.  [author] Jun 17, 2019 @ 1:34am
Hey guys,
Went ahead and tested my mod in the newest update and everything appears as they should.
Happy hunting!

Fixed it so now male Glitch get their respective hairstyles.

If there are any issues, please let me know and I'll get on it as soon as possible.