Store Page
Besiege >  Workshop > Narzu's Workshop
This item has been removed from the community because it violates Steam Community & Content Guidelines. It is only visible to you. If you believe your item has been removed by mistake, please contact Steam Support.
This item is incompatible with Besiege. Please see the instructions page for reasons why this item might not work within Besiege.
Current visibility: Hidden
This item will only be visible to you, admins, and anyone marked as a creator.
Current visibility: Friends-only
This item will only be visible in searches to you, your friends, and admins. 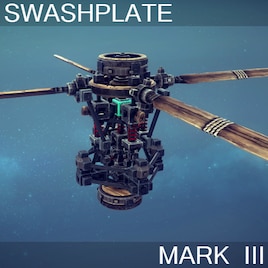 This item has been added to your Subscriptions. Some games will require you to relaunch them before the item will be downloaded.
Description
Like most of the creations designed to mimic helicopter flight, this swashplate system include cyclic and collective controls. The physics make it complicated to handle, there are phase shift and transverse flow effects, anyway the overhaul behavior is not so far from real helicopters.

Here is the first prototype. The improvements are the followings :
- More stable and stability is achieved without baloon (more realistic system - though this is still not a flybar)
- More compact design - easier to integrate in a helicopter hull
- Better control system for the cyclic pitch : replacing contractable spring by pistons

Controls
Advice
You can weaken the 4 suspensions at the bottom (shown picture 2) if you want more cyclic control effect, strenghten them would at the opposite make the machine more stable.

Narzu  [author] Sep 7, 2016 @ 10:47am
Ok well, I'm just trying to see where the forces and torques are located and how it combines in order to get an understanding on what's going on

Every effect is quite well documented on google & wiki, there is no need to be an expert imo!

Thatoneguy Sep 5, 2016 @ 10:36pm
I am by no means an expert in physics. I have worked a little in the past with physics software but even Besiege has more capabilities. I have noticed though that a balanced (as close as possible), four-prop machine will begin rotating while travelling upward. That included half of the motors rotating opposite the others.

Narzu  [author] Sep 3, 2016 @ 10:45am
I'm still sceptical about besiege's physics but I need to build experiments to show things. especially about the 3rd law of newton on inertial wheels and on spinning systems that actually are decelerating way too fast in my opinion.

And because of that I can't build a proper wirligig that is spinning long enough at a fast enough speed to show interesting results about gyroscopic precession in besiege. Systems with contrarotating parts are actually messing the results

I feel really idiot because I try to address things one by one and we actually can't do that because thoses forces have too much interactions and we can't insulate them.

So if I understand well, if we think using angular momentum and mix everything in it, this should be like this :
-The vertical component is function to spinning speed and inertial momentum (which remains constant if we consider there is no drag angle)
-Any dissymmetry of lift force (arround the spinning axis) will induce 2 horizontal components : the 1st one is the one we actually apply, and the 2nd one is the gyroscopic precession effect, and is at a perfect 90° angle with the 1st one.

And the lift force is applied with phase lag from the input because of inertia and elasticity of parts & joints.

Thatoneguy Aug 31, 2016 @ 9:51pm
The beauty of building it into a vehicle is that the control stick can be arranged so that the steering is intuitive. ;) One of my favorite clips: https://www.youtube.com/watch?v=eTjGTxSevHE
Keep up the good work.

Then I'll need to go on with advance angle (but I find that ugly), and also transverse flow effect is messing around as well... This is like a really big challenge to resolve all this in besiege

Narzu  [author] Aug 31, 2016 @ 7:14am
Thanks! Do you mean that this phase shift is observable in reality? (And is related to physics and not a limitation due to simulation?) I'm pretty sure that the physics in besiege is correct, but only up to a certain degree of accuracy (due to calculation cost)

Thatoneguy Aug 31, 2016 @ 12:10am
Nice design. I was surprised how stable it was. That phase shift is inherent to spinning objects (the same reason a gyroscope can be supported on one side of its axle but rotate horizontally). I guess the Besiege devs know their physics.
< >