Store Page
RimWorld>  Workshop > mal_wilson's Workshop
This item has been removed from the community because it violates Steam Community & Content Guidelines. It is only visible to you. If you believe your item has been removed by mistake, please contact Steam Support.
This item is incompatible with RimWorld. Please see the instructions page for reasons why this item might not work within RimWorld.
Current visibility: Hidden
This item will only be visible to you, admins, and anyone marked as a creator.
Current visibility: Friends-only
This item will only be visible in searches to you, your friends, and admins. 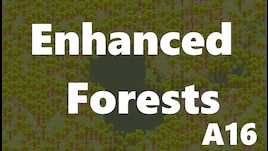 mal_wilson
Offline
See all 39 collections (some may be hidden)

This item has been added to your Subscriptions. Some games will require you to relaunch them before the item will be downloaded.
Description
A greatly enhanced flora density and retweeked plant types slightly to fit in with the biome better.
this version also has a slight change to jungle animals with the rare pig and chicken. and some other minor rebalancing, this version also has a few weather tweeks, ie no snow in jungle stuff like that.

The only mods it is incompatible with are the kuzo mods, which alter the same file,if you enable both at the same time one will overwrite the other but it shouldent do anything past that.

For comparison to the kuzo mod, a similar forest density mod i will highlight key diferences per biomes

mal_wilson  [author] Jan 1, 2017 @ 11:30am
While you still can farm you will have a few trees in your outdoor farms untill you manualy remove them, i would recomend having smaller farms and more plant cutters/growers. and above that grow plants indoors, even though thats not posible in most early situations. but yea thanks for tree reports i guess?

mal_wilson  [author] Jan 1, 2017 @ 11:26am
Ahh so after looking threw it and doing some gameplay, the game seems to be breaking its own limits on how fast trees can spawn. as of right now i have only one idea on how i would fix it. unless rimworld itself fixes it.

Boris Grishenko Dec 31, 2016 @ 5:25pm
Mod adds way too many trees, also I cannot farm because whenever a pawn chops down a tree another one pops up immediately in the same spot. "Slightly higher plant density" is a vast understatement. It's now easier to build a base in a mountain than it is outside, especially in the jungle.

SmokinFire Dec 28, 2016 @ 11:15pm
ITS A GOOD MOD, BUT IT MAKES MY COMPUTER CRASH EVERY MINUTE OF GAMEPLAY MAYBE RELEASE A LITE VERSION? U KNOW, SOMEWHERE IN BETWEEN OVERLY ENHANCED AND VANILLA?

Sheena-Tiger Dec 28, 2016 @ 12:22pm
Well, I have on almost each and every field a tree on the map, at least where they can grow ^^
Nevertheless, that game is over anyway... maybe a bug for some reason (I use a lot of other mods) ... due to not many attacks but every even little event was taking a toll on my workforce who had no time to grow medicine and other stuff in bigger numbers while wood piled up ^^

Clearing out bigger regions... out of the question as well... as I could watch "they cut down a tree... now there is a new one", unless they had material next to them and there is an order to built something.

Funny thing was watching a group of alphabievers going through the map. they actually cleared a path... for a bit. But those were 10 or so doing only that and sleeping compared to my 3-5 people having other needs.

mal_wilson  [author] Dec 28, 2016 @ 11:02am
And sometimes steam will just not update stuff that day. im not too sure why it would but it happens. you could try compleatly closing out of steam and relaunching it to see if it forces it to update or just wait a few hours.

mal_wilson  [author] Dec 28, 2016 @ 10:59am
Also it doesent change the regrow rate just the max density so once you clear out land it should be clear for almost a season before anything but grass grows in it.
< >