Store Page
No Man's Sky > Guides > Frederic Freakazoid's Guides
This item has been removed from the community because it violates Steam Community & Content Guidelines. It is only visible to you. If you believe your item has been removed by mistake, please contact Steam Support.
This item is incompatible with No Man's Sky. Please see the instructions page for reasons why this item might not work within No Man's Sky.
Current visibility: Hidden
This item will only be visible to you, admins, and anyone marked as a creator.
Current visibility: Friends-only
This item will only be visible in searches to you, your friends, and admins.

Final Creature/Fauna Guide
By Frederic Freakazoid
Where specifically to look for that last elusive creature.

Comments
Common Basics
This much you may or may not know as it's been reported elsewhere.

Some creatures only spawn:
at night
in caves (and cave-like surface areas with cave flora)
in water
in the air (shoot first scan later now much easier to scan)

Some have two "genders" (I've found two of the same creature without an established/clear gender) and won't appear to register as a new creature, or will register but might not yield 100% until the other is found (this seems to not be true anymore?).

Keep running around with your visor button pressed to hunt them down! Melee-jetpack to move faster. Don't try to find creatures via your ship. Green blips you have, red blips you don't. A colorless blip is a creature/creatures too far away to identify. A circled dot is something else unrelated.

Is that everything? Yes? No? Maybe? Good!
Creature Order
At first glance it all appears random, but it's not! Check out your discoveries page after each scan! The following images are from three consecutive planets.

So close and yet so far. I easily spent at least 12 hours here. I'm presuming the top right creature is a super rare and/or night predator. Also I specifically marked the "exotic" because it's placement probably has significance. On this planet it was surface dwelling butterfly-like creatures. (I'm not sure why the image shows 100%. It might not have refreshed all the way after I switched planets.)

This was my first 100%. Top left was nearly impossible to find, but at least it didn't take 12+ hours!

I thought my theory was wrong when I'd found the predator in this list. It was technically on the surface. Then when I found it's "better non-gender-specific half" in a cave, I realized the first I'd encountered was among cave flora on the surface. Therefore cave fauna will be on the list between air and water. This planet had "puddles" compared to others, but there still ended up being "fish" in some!

One of the very next planets I happened upon a water predator. 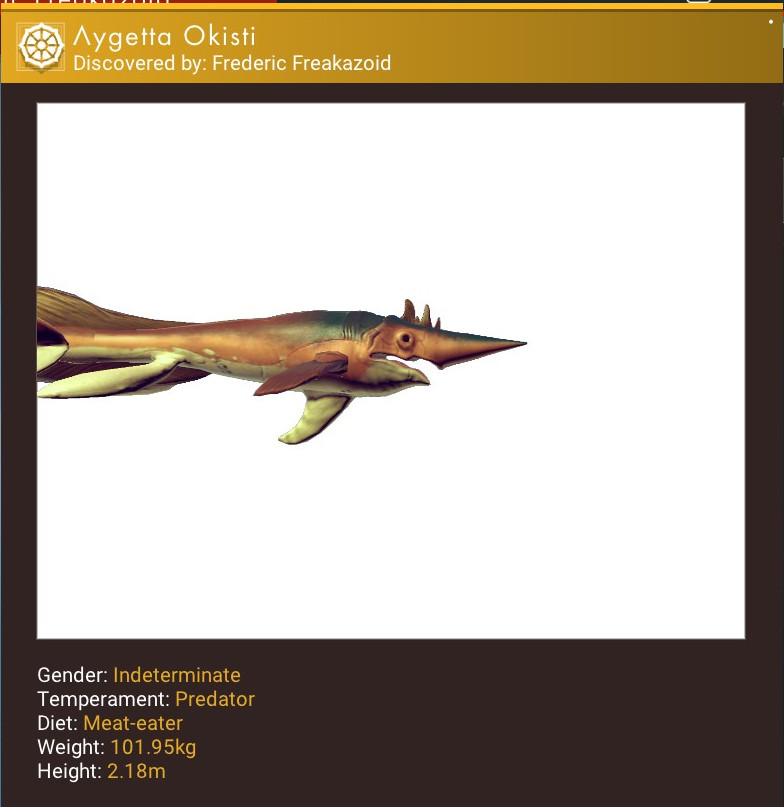 This planet threw me for another loop. The last land creature was also aggressive, and not easy to find. It was labeled as a "Hunter". I don't know if a "hunter" counts as an exotic type, but I'll presume there is some rhyme or reason for its placement. Also the "water predator?" is the exact same "shark" as the previous planet, but labeled as some undetermined temperment. 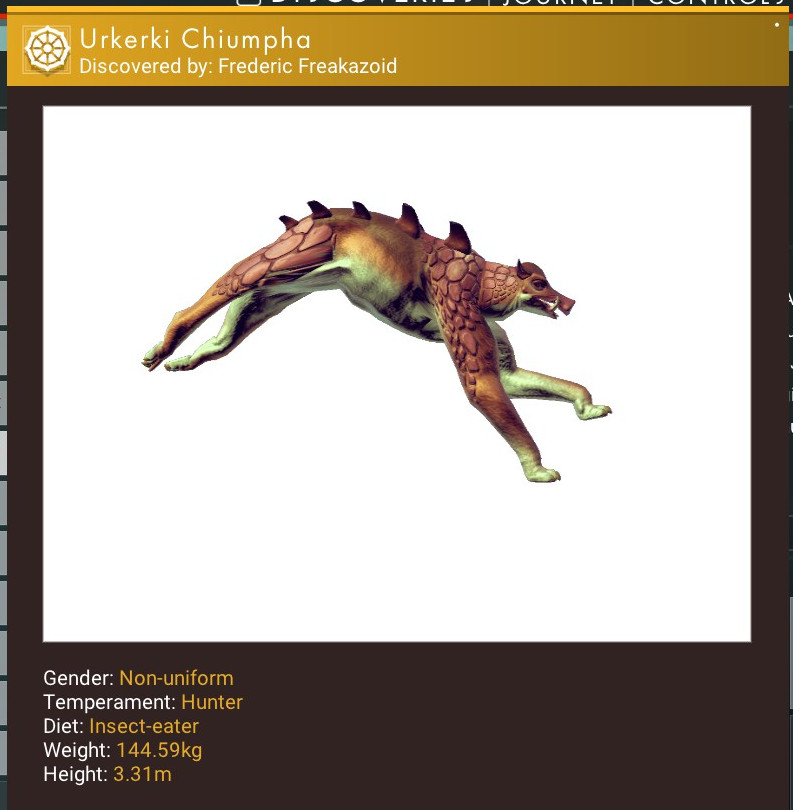 So it seems you can find each creature in a more specific location depending on it's placement in the list.

I haven't encountered Air predators/exotics, but it doesn't meant they don't exist. If they do they would appear above/below in their respective list locations.

Also of note. So far it seems some air/water dwellers share the same "last name" in the pre-generated gibberish. Although so do some surface dwellers, so it's significance is uncertain.

Please share screenshots to help me verify! (you have to scroll through the animals below on the same screen and check where their names appear on the list)

Edit #2: A fun picture from Planet Nix, discovered by Nix near the Galactic Center (Euclid)

This is what happens when you dicover a planet but not the Fauna. Mwahahahahahaha. The "Welcome to Planet Nix" creature is a bug-like predator that may or may not have a blue mohawk. Sadly I typed a bit much in a couple entries, but you get the gist of it.
< >
6 Comments

Jonesey Feb 12, 2017 @ 7:04am
THIS is why I absolutely HATE this game. What good is there in setting one up for a nearly-impossible task? And people call this FUN?! Pardon me while I slowly bleed to death and hope for reincarnation on some other planet OTHER than Earth. Fuck this scan bullshit.

You can also usually see the cave "blips" from above ground. I had a planet with 1-2 cave dwellers that happened to be the majority of the blips on the visor-view.