Greenlight > Games > Trainwreck Games's Workshop
Greenlight is being retired. For more information on how to submit games to steam, refer to this blog post.
This item has been removed from the community because it violates Steam Community & Content Guidelines. It is only visible to you. If you believe your item has been removed by mistake, please contact Steam Support.
This item is incompatible with Greenlight. Please see the instructions page for reasons why this item might not work within Greenlight.
Current visibility: Hidden
This item will only be visible to you, admins, and anyone marked as a creator.
Current visibility: Friends-only
This item will only be visible in searches to you, your friends, and admins.
Ulama: Arena of the Gods
Description Discussions0 Announcements1 Comments68 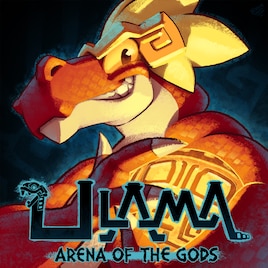 Trainwreck Games
Offline
See all 3 collections (some may be hidden)

View Ulama: Arena of the Gods in the store

Hey everyone! Thank you so much again for supporting our Greenlight effort! After a long silence, we're finally releasing Ulama: Arena of the Gods on Early Access. You can get it starting tomorrow and brawl to your heart's content! We'll be waiting for your feedback and seeing what we can improve on the Ulama experience :D

Read More
Description
Have you ever wondered what the Gods would play if they had a sport? Well, the Aztec and Mayan civilizations played a brutal ball game representing their deities’ eternal struggle for supremacy. In Ulama: Arena of The Gods, you get to experience what the game would be like if the Gods themselves played it!

Ulama: Arena of the Gods is a mix between a 2D brawler and a team ball sport. In it, players form into teams and pick their characters from a roster of the Aztec pantheon. Then they duke it out in the ball court to score the most goals on the opposing team’s portal, hopefully beating their rivals senseless in the process! Each character has unique characteristics and abilities that the player will be able to combine with her teammates’ to do awesome plays or knock her opponents right off the stage.

Blayne Jan 16, 2017 @ 2:27pm
This game looks good! Is there any possibility of a review copy of this game? I could give some great feedback and an honest review with praise where its due and constructive criticism. I also have a big group of testers if you are willing to give extra keys and they are just waiting to play your game!

I could even do some promoting for the game!

Мясник Sep 18, 2016 @ 3:29am
Hello, I would like to offer you the translation of the game into Russian language, if you are interested then send me an email mannegreim0@gmail.com.

nickleeb Aug 29, 2016 @ 2:41am
LOL @Game Development Championship I'm pretty sure if you are out advertising on random Steam forums... This game will help YOUR 'visibility' not the game creator's....

nickleeb Aug 26, 2016 @ 1:49am
so its ONLY couch multiplayer? If so, thats lame, I want to play with everyone, with matchmaking

Really would appreciate a SteamOS version.

Ulama: Arena of the Gods has been Greenlit and is now listed in the Steam store. For the latest information, purchase options, and discussions for Ulama: Arena of the Gods, please see it on the Steam Store or in the Steam Community.
Visit Store Page
For more details Visit Community Hub
For latest discussions
If you really, really want to, you can continue to the Greenlight page. Information on this page may be out of date, since all the action has moved to the areas noted above.