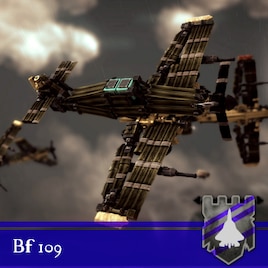 The Messerschmitt Bf 109, commonly called the Me 109, is a German World War II fighter aircraft designed by Willy Messerschmitt and Robert Lusser during the early to mid-1930s.

This Bf 109 has two powerful cannon, a very low block count, simple, quite agile. Stalls very easily. The trick to recover from stall was not press pitch, but roll and hope you have enough altitude before crashing into ground XD

Broomhilda _Thunderchunk Nov 29, 2016 @ 4:32pm
yeah i realised that also i love your version you finally gave in to my requests

Shadé  [author] Nov 29, 2016 @ 4:25pm
@HomelessAvocado Have you tried to accelerate by holding Z button when taking off (after turned on engine)?

Shadé  [author] Aug 19, 2016 @ 9:40am
@SSgtWolf I have a timelapse video on me building plane on my youtube from starting block until ready to upload. Not this plane tho but it should give you general grasp on how do i build my planes
< >