Store Page
Arma 3 >  Workshop > TeTeTe3's Workshop
This item has been removed from the community because it violates Steam Community & Content Guidelines. It is only visible to you. If you believe your item has been removed by mistake, please contact Steam Support.
This item is incompatible with Arma 3. Please see the instructions page for reasons why this item might not work within Arma 3.
Current visibility: Hidden
This item will only be visible to you, admins, and anyone marked as a creator.
Current visibility: Friends-only
This item will only be visible in searches to you, your friends, and admins. 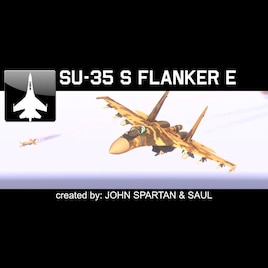 John Spartan
Offline
See all 2769 collections (some may be hidden)

This item has been added to your Subscriptions. Some games will require you to relaunch them before the item will be downloaded.
Description
The Sukhoi Su-35S Flanker E is a designation for heavily-upgraded derivative of the Su-27 Flanker. It is single-seat, twin-engine supermaneuverable multirole fighter.

END USER LICENCE AGREEMENT
You are permitted to install and use this software for personal entertainment purposes only. This add-on is meant for ARMA 3 game platform by Bohemia Interactive only. Any commercial or military use is strictly forbidden without permission from the author.

This addon is released under Creative Commons Licence:

Special thanks’ goes to all the ALPHA testers for help with MP/COOP testing, their advice on creating more realistic flight model. And of course all the community members for being so kind and posting valuable information/tutorials and solutions about how to mod this game.

TeTeT out.
Popular Discussions View All (2)

TeTeTe3  [author] Mar 1 @ 12:29pm
Feel free to join our discord at https://discord.gg/f3Qzmqx9 and provide patches or config changes in correct format and tested for any fixes you want to see.

Seth Mar 1 @ 9:05am
When i get to change weapons in arming menu, the LASER that comes with the main gun disappear, help plz? :(

erau_Hatsune Feb 28 @ 4:17pm
Can you update the mod when you are free to solve some issues?

chis2009diman Feb 20 @ 1:39am
I wanted to suggest replacing the ILS panel with a mod class MFD Su 27-35.The author does not object.MFD is very high quality.

kibaBG Jul 7, 2021 @ 7:18pm
Does this plane have targeting reticle for unguided rockets? I have to target with the main gun and then switch to unguided rockets and fire because there is no reticle showing where the rockets will land. Do I miss something?