Greenlight > Games > DNVA's Workshop
Greenlight is being retired. For more information on how to submit games to steam, refer to this blog post.
This item has been removed from the community because it violates Steam Community & Content Guidelines. It is only visible to you. If you believe your item has been removed by mistake, please contact Steam Support.
This item is incompatible with Greenlight. Please see the instructions page for reasons why this item might not work within Greenlight.
Current visibility: Hidden
This item will only be visible to you, admins, and anyone marked as a creator.
Current visibility: Friends-only
This item will only be visible in searches to you, your friends, and admins.
Where are my Internets?
Description Discussions0 Announcements2 Comments87 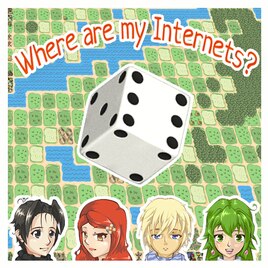 DNVA
Offline
See all 5 collections (some may be hidden)

View Where are my Internets? in the store

Today, on December 16, 2016 a game was released in steam!
This is a first release in Steam for our team, and can be say, that it is our holiday. Many of us dreamed of it long time ago.

Please, don't hesitate to leave comments and information about bugs and errors, that may be you found in-game. Your opinion is very important for us, and we will continue fix bugs.

Thanks to all who followed the project who supported and believed in us! It is very nice that at last everything has turned out and a game is ready!

We are working on fixing errors and bugs in English translation. Sorry for it. Thank you.

Read More
Description
About the game

"Where are my Internets? " It is a board game set in a strange fictional world that resembles our present-day world, but with elements of humour and surreal events. You play as a typical city person who arrives in a desolate countryside with no trace of the internet. Your aim is to survive in these tough conditions. There is only one way you can do it: find an internet provider, and get online.

● Unusual idea and setting.
● Original graphics with a unique style.
● Pleasant atmospheric soundtrack.
● Single Player, with up to four Characters.
● A lot of surprises and humor.

The aim of the game is to bring the internet to every village on the map. It requires money, which can be obtained by selling items you earn from using the cards.

The first is the wilderness. When a player is in the wilderness, they have a choice on each turn between staying to activate some event card and going further. There are 26 event cards, of which 3 are unique to each type of location. The wilderness location has the following land types.

Each card describes a different event, usually a fight. If the player wins the fight, they gain an item card, if they lose, they lose one mood point. There are a few surprise cards, marked with a question mark, for unexpected events.

Players can sell items they have earned, and get onto the internet in a village. The cost of internet use will go up each time you connect to and or use it. If the village already has a connection, players can simply use it (but must pay the owner). An indicator in the upper right corner shows whether the village is connected or not, and who owns the connection.

If a player's token is somewhere near an internet-connected village, the player can get a remote internet signal and replenish their stamina as if they were in the village.

If there is no signal, the player has to draw a fight card.

You can also tweak your dice move by using bonus cards. These are given out after you finish a circle, and sometimes also drop from the chests.

Thank you for your time!
I hope you have a great time playing our game with hours of enjoyment, and a fun!
< >
87 Comments

Where are my Internets? has been Greenlit and is now listed in the Steam store. For the latest information, purchase options, and discussions for Where are my Internets?, please see it on the Steam Store or in the Steam Community.
Visit Store Page
For more details Visit Community Hub
For latest discussions
If you really, really want to, you can continue to the Greenlight page. Information on this page may be out of date, since all the action has moved to the areas noted above.