Greenlight > Games > LnLP's Workshop
Greenlight is being retired. For more information on how to submit games to steam, refer to this blog post.
This item has been removed from the community because it violates Steam Community & Content Guidelines. It is only visible to you. If you believe your item has been removed by mistake, please contact Steam Support.
This item is incompatible with Greenlight. Please see the instructions page for reasons why this item might not work within Greenlight.
Current visibility: Hidden
This item will only be visible to you, admins, and anyone marked as a creator.
Current visibility: Friends-only
This item will only be visible in searches to you, your friends, and admins.
Command Ops 2
Description Discussions0 Announcements1 Comments102 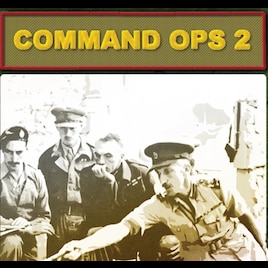 View Command Ops 2 in the store

Here is a video that will show you the different zoom levels available in Command Ops 2.

Command Ops 2 is a wargame engine that lets you assess, plan, order and react at the operational level just like a real Corps, Division and Brigade commander.

What sets Command Ops 2 apart from the competition is the most advanced and realistic model of command decision-making implemented to date in a commercial wargame. It is based on:

For that, Command Ops 2 is different than any other simulation wargame: no hexes, no turns, no micro management, no click fests. That is why it is in a way simpler and more fun to play but at the same time more challenging, because it makes you command like Commanders do.

Command Ops sports some of the most advanced and impressive AI ever devised in an operational-level wargame. It is your choice whether to manage every detail of your army or have the friendly AI manage the war on a lower level while you plan the larger scale maneuvers designed to make short work of your enemy. Just as a historical commander, you can choose where you need to step in and when you need to stand back and let your subordinates do their jobs.

The enemy AI will use its skill to launch well-timed and coordinated strikes as it probes your lines for weakness while realistically reacting to your movements! In addition, for the enthusiastic mod community awaiting Command Ops, powerful tools like MapMaker and ScenMaker allow for the creation of maps and scenarios further adding to already near limitless replayability.

Command Ops 2 game application has a new user interface (UI) and enhanced artificial intelligence (AI). The smartest and most realistic operational level wargame just got a whole lot better. Command like a real commander in this pausable, continuous time simulation of WW2 operational warfare, where the emphasis is on planning, anticipating and reacting to enemy developments. This is not a click-fest, and you don’t have to issue orders to every unit. The world’s smartest operational level AI can be trusted to do a reasonable job of managing your forces. Also included are the editors ( MapMaker, EstabMaker, EstabEditor, and ScenMaker ) for modifying or developing your own scenarios. The Core comes with three scenarios, including the tutorial Return to St Vith, Manhay Crossroads, and Greyhound Dash, all focussed on the Epic 1944 Battle of the Bulge.


* Realistic command decision-making at the operational level
* Assess, plan, order and react just like a real Corps, Division, and Brigade Commander
* No hexes, no turns, no micro management, no click fests
* One of the most advanced commercial AI opponents ever developed
* A contender for the best AI in any wargame
* The AI can manage subordinate commanders and handle micromanagement
* Automated bridge building
* Advanced force allocation algorithms to keep your army balanced and sharp
* Multiple force group structures to enable cross attachments and different ways of displaying the order of battle
* Reaction and reassessment code for smarter responses from both the enemy and friendly AI
* Scheduling code to better manage the sequencing of tasks
* Multiple route finding algorithms so units can rush to battle but become exposed, avoid enemy firepower,
stick to covered terrain or take a safe but slow route
* Formation movement code, including phase lines
* Enhanced sighting code
* Enhanced basing code
* Intuitive powerful interface
* Configurable Interface layout. Just drag dialogs to where you want them and it remembers the layout for next time.
* Multiple Screen Support so you can position your dialogs on your second monitor.
* Clear and concise tutorial movie to get you up to speed
* Order options give you more control including attacks, bypasses, ambushes, stragglers, basing, retaking of position,
avoiding friendlies, rest at night etc.
* Automate units and let the cutting edge AI manage smaller units while you concentrate on the big picture
* Order timing controls to coordinate tasks
* Order supply level settings so you can set resupply priorities
* Order of battle display to help you organize your forces
* Estab Data views to access weapon and vehicle performance data
* Plan dialog so you can see all your orders at a glance
* Fire Support dialog so you can manage your heavy hitters (artillery)
* Reinforcement dialog so you can manage your new arrivals
* Supply Arrival dialog so you can see what resupply you are getting
* Filtered Message Log
* Auto Save
* Interactive Recordings that you can replay and, at any point, change your orders to try out new courses of action
* Map patterns now change with the weather
* Pathing tools provide estimate of duration
* Tons of Replayability - many scenario options, including multiple random reinforcement schedules
* Extensive unit, vehicle and weapon estabs, including German, American, British and Italian forces
* Full construction set includes editors to create units, equipment, ammo and formations (EstabEditor); maps
(MapMaker) and scenarios (ScenMaker) for any battle.
* An Estab Editor to modify or create Forces, Equipment, Ammo, Formations, etc.
* Mod various aspects of the game, including map patterns and victory messages.
* Utilize a big range of force lists for rapid scenario creation
* Situation Awareness Maps for easy scenario selection.
* and many other features.
< >
102 Comments

PantherDave Feb 9, 2017 @ 11:20pm
EmersedKris. Yes you can buy safely from LNL store. All our products will be sold at both LNL and on Steam

Sir EmersedKris Von Kreissler Feb 9, 2017 @ 9:28pm
will you be also bringing the other moduls for the game with this relasese?

Sir EmersedKris Von Kreissler Feb 9, 2017 @ 8:24pm
the main site lock nd loaded site is what i am refering to pantherdave

LnLP  [author] Feb 8, 2017 @ 9:59pm
Hello, SeriousCat, We do plan on offering Steam Keys but we will not most likely have it on release day. We will update you when we know more.

PantherDave Feb 8, 2017 @ 2:25pm
SeriousCat, I've asked David Heath of LNL to get back to you on your question about STeam keys for LNL purchasers.

Also, can we get Steam codes for the releases from Lock 'n Load Publishing like they do with Matrix Games?

Command Ops 2 has been Greenlit and is now listed in the Steam store. For the latest information, purchase options, and discussions for Command Ops 2, please see it on the Steam Store or in the Steam Community.
Visit Store Page
For more details Visit Community Hub
For latest discussions
If you really, really want to, you can continue to the Greenlight page. Information on this page may be out of date, since all the action has moved to the areas noted above.