Store Page
Starbound>  Workshop > Grimmers's Workshop
This item has been removed from the community because it violates Steam Community & Content Guidelines. It is only visible to you. If you believe your item has been removed by mistake, please contact Steam Support.
This item is incompatible with Starbound. Please see the instructions page for reasons why this item might not work within Starbound.
Current visibility: Hidden
This item will only be visible to you, admins, and anyone marked as a creator.
Current visibility: Friends-only
This item will only be visible in searches to you, your friends, and admins. 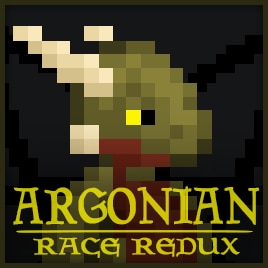 Grimmers
Online
See all 16561 collections (some may be hidden)

This item has been added to your Subscriptions. Some games will require you to relaunch them before the item will be downloaded.
Description
Argonian race for Starbound 1.0. Explore the firmament as a child of the Hist.

This is an update and continuation of the amazing work by Sabboth with the original Argonian Race Mod. The goal of this mod is to get as close to 100% parity with the vanilla races as possible. It's fairly close.

Additional Features:
- Some legacy Argonian racial weapons which can be made at a temporary Argonian Crafting Table. Subject to change as these objects can be more immersivly integrated.
- A custom Argonian codex tab with a few selections of Argonian-focused lorebooks. Usage requires Many Tabs by V6.
- Some additional random encounter Argonian NPCs are available in supplemental mod here:
https://steamcommunity.com/sharedfiles/filedetails/?id=813797002

Compatibility and Requirements:
- Mod is natively supported by Fracking Races, thanks for the support sayter!
- Xbawks Character Extender is a recommended race extender, if you prefer an alternative one it should work fine too however.
- Many Tabs is a soft-requirement for the custom Argonian codex tab. Mod will work without it but the Argonian codex will be unusable.

Credits:
Sabboth Ochoa for the original mod and his amazing sprite work and the permission to use it. This mod is just an update of his work.

Additional credits go to OrangeBlueZ who initially updated the mod for Upbeat Giraffe. His files were invaluable reference.

Argonians, The Elder Scrolls, and all other trademarks belong to Bethesda Softworks and Zenimax Media; the creators of the deep fantasy world from which this mod is based.
Popular Discussions View All (1)

And thank you for any recommendations you may send my way, heh.
Have a good day/night!

Grimmers  [author] Oct 12 @ 12:03am
@Oмεяυıп Sounds awesome, good to see another mod for that besides frackin'.

And yeah looks like you got all the argo staples of poison resist and the water advantages. I expect you'll have a much better sense for exact value balance than me having setup all the other races too. So yeah, feel free to put me down as supportive.

I occasionally get requests for race traits from people who don't want to plunge into frackin, I'll definitely throw em your way if I get another.

Oмεяυıп Oct 11 @ 11:08pm
Heya!
I've already given your race stats for my Race Traits mod, but I saw that you're still an active author, so I wanted to personally ask you instead.
If you look at the Race Trait mod's description, it'll have stats for the Argonians already via the Stat Sheet Google Sheets link that you can check out online.
Tell me if you agree with or disagree with the stats given. I'd love to have your official support! We can also talk on Discord or etc.

Grimmers  [author] Jul 19 @ 5:23pm
Alright, small update issued to correct codex issue. Many Tabs is now a soft-requirement for the mod for those wishing to use the Argonian codex tab. Was hoping to avoid this as I'd like vanilla users to be able to enjoy the glorious saxhleel literature too, but unfortunately the vanilla codex menu is too difficult to mod to feasibly support it.

Vanilla users should no longer have a broken codex, and previous vanilla + Extended GUI users should simply add Many Tabs to your modlist, it's still compatible with ExGUI.

Thank you Paleronsa for bringing this issue to my attention!

Grimmers  [author] Jul 19 @ 3:53pm
I think I've found the issue. I accidentally built a reliance upon the extended gui mod for my codex modifications, I swear I tested for that before but apparently not. For now please either install both Many Tabs mods and/or Extended GUI and it should fix the issue. Pretty much you just need v6's codex graphics which either mod provides.

paleronsa Jul 19 @ 11:20am
I'm using FU and a couple of FU compatible custom races. I tried to uninstall and reinstall all of them and unfortunately only this mod breaks it while others are ok together. Maybe one of the race mod conflicts this one.

Grimmers  [author] Jul 16 @ 12:04pm
@paleronsa It appears to still be working perfectly for me with both the vanilla and many tabs configurations.

Do you have any other race mods that add a custom codex? If so you'll want to sub to the many tabs mods by v6 as it allows compatibility. Also please ensure you're either on the latest version or have unsubscribed from the argonian race redux supplemental mod, as you may have old codex files in that from before I removed them. Additionally, if you're running any custom UI mods that affect the codex screen, it may unfortunately be incompatible with how I and many tabs edit the vanilla files.

paleronsa Jul 16 @ 3:43am
Hey, just found out this mod breaks the codex window in my game for some reason.
< >