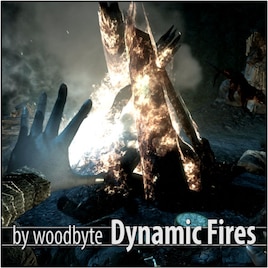 woodbyte
Offline
See all 4516 collections (some may be hidden)

This item has been added to your Subscriptions. Some games will require you to relaunch them before the item will be downloaded.
Description
Allows one to ignite and extinguish fires by using fire and frost spells, respectively. It also puts out fires that have been running for some time. (**update** - torch bashing now lights up fires too)

This initial release features all campfires. Other fires will be added in future versions. Watch the video to see the mod in action, and rate if you enjoy!

Nexus mirror can be found here: http://skyrim.nexusmods.com/downloads/file.php?id=17969
Besides having the latest version it also archives all previous ones, making it a good place to see what was added/fixed in each release.

REQUEST FOR FEEDBACK
I've maintained the same light intensity of the original campfires and realise it may be too dim, especially for those using Realistic Lighting. I've got no problem increasing it a bit, so let me know if it's an issue. The giant campfires did not have any light sources in the original game so I created my own. Again, let me know if the intensity/radius are good.

I'm also considering to make shock spells behave the same as fire, but I'd like some community feedback on this before going ahead with it. So please drop a comment and let me know of any problems and/or suggestions.

COMPATIBILITY
Being mostly scripted, this mod should be compatible with nearly anything. Even mods that add to or remove campfires from the world shouldn't conflict, so long as they use the original game's objects. Still, since this is the first release and because of its scripted nature you should keep an eye out for and report the following: campfires that don't react to spells, light present even when a fire is off, extinguish smoke effect too big/small and other unexpected problems.

One thing you can be sure of is this plugin won't ever leave your game in a broken state. I've designed and tested it following that very principle (along with seamless updates). In fact, If you unsubscribe it will be as if it was never installed.

UNINSTALL
To uninstall simply unsubscribe or uncheck this mod on the launcher - all campfires will revert to vanilla states.

FOR FELLOW MODDERS:
I've tried to make this mod as easy to extend as I could. It relies heavily on formlists and if you know a bit about scripting it should only take a few moments to leverage this mod's functionality for your own creations.

An example: you create a mod that adds awesome Thief-like fire/water arrows. To make them ignite/extinguish stuff all you need to do is create a quest and attach a script like this (not forgetting to auto-fill the properties):

That should be all that's required. A similar method can be used to integrate new objects into this mod so that they too become dynamic. However it involves alot more lists and a few special cares. I'll explain the process soon.
Popular Discussions View All (1)

Timesplitter Nov 23, 2018 @ 10:56pm
TESV: Skyrim: God Amongst All Edition 11/23/2018 has just been released. Thank you for your amazing mod that contributed greatly to making this mod collection what it is today. Newly included in this collection are the Unofficial Skyrim Patches making this game run as stable and smooth as Skyrim Special Edition. Thank you again for your amazing addition to the collection. Check it out at https://steamcommunity.com/sharedfiles/filedetails/comments/106745968 . Your one arrow to the knee that's left, Timesplitter.

ItsFrenzius Feb 7, 2018 @ 4:23pm
When I light up a fire it goes out after about 5 - 30 minutes. im ot complaining about it, it just gets annoying when i have to repeat the same task over and over

THE DESTROYER Nov 16, 2017 @ 11:01am
will there ever be an update or seperate addon that allows you to build walls out of ice i am looking for a mod that allows that i cant use the nexus for some reason so i cant get frostfire i just wanna mod where i can build walls of fire

mhiggins1979 Sep 15, 2017 @ 6:20am
are the lighting levels effected when you put out a fire? such as, in a dungeon or cave when you remove a torch from the wall it gets darker......does this mod do the same thing with extinguishing the fires?

MRDRK1 Aug 10, 2017 @ 5:51pm
Is this mod out of date for the Skyrim version? It doesn't seem to be working. Does it conflict with the most recent Frostfall/Campfire mod? Thanks in advance!
< >