Greenlight > Games > alancaselli's Workshop
Greenlight is being retired. For more information on how to submit games to steam, refer to this blog post.
This item has been removed from the community because it violates Steam Community & Content Guidelines. It is only visible to you. If you believe your item has been removed by mistake, please contact Steam Support.
This item is incompatible with Greenlight. Please see the instructions page for reasons why this item might not work within Greenlight.
Current visibility: Hidden
This item will only be visible to you, admins, and anyone marked as a creator.
Current visibility: Friends-only
This item will only be visible in searches to you, your friends, and admins.
Magical Mysteries: Path of the Sorceress
Description Discussions0 Announcements2 Comments51 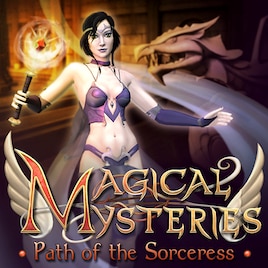 derhoarman
Offline
See all 4 collections (some may be hidden)

View Magical Mysteries: Path of the Sorceress in the store

Thank you for helping us to get Magical Mysteries on Steam!
Right now, we're working hard on Steam Achievements, Trading Cards and also fine tweaking the game itself to provide the best experience in the Steam version of this title.

Did you know that Magical Mysteries was first released 5 years ago?
We distributed it mainly on major casual portals; tried to bring something fresh to the world of marble poppers and swap-to-match puzzles. Although, for most casual players the gameplay, the setting and the presentation weren't familiar enough, the game had its fans, and they finally made it successful.

Now, we're bringing the game to you, and by the current Greenlight stats, it looks like you're interested! Thanks for your votes!

Overview:
Magical Mysteries is a game of brain-teasing puzzles and fast-paced match-3 battles in a magical 3D fantasy world. Search for enchanted scrolls, make useful potions and beat your mysterious enemies! Improve your spells and unravel the story of the Sorceress.

The Hourglass and Survival minigames together with the unlockable very hard difficulty level are giving extra challenge for the best players.

Face your fears and start your journey!

Mr. Homer Jan 14, 2017 @ 4:34am
Hey, if your interested i coud promote your game or/and if you need/want i test the game to write a review for it and find glitches/bugs if there are any.
Also i can get some more testers if necesary,

Magical Mysteries: Path of the Sorceress has been Greenlit and is now listed in the Steam store. For the latest information, purchase options, and discussions for Magical Mysteries: Path of the Sorceress, please see it on the Steam Store or in the Steam Community.
Visit Store Page
For more details Visit Community Hub
For latest discussions
If you really, really want to, you can continue to the Greenlight page. Information on this page may be out of date, since all the action has moved to the areas noted above.