Store Page
Starbound >  Workshop > Supēsuurufu's Workshop
This item has been removed from the community because it violates Steam Community & Content Guidelines. It is only visible to you. If you believe your item has been removed by mistake, please contact Steam Support.
This item is incompatible with Starbound. Please see the instructions page for reasons why this item might not work within Starbound.
Current visibility: Hidden
This item will only be visible to you, admins, and anyone marked as a creator.
Current visibility: Friends-only
This item will only be visible in searches to you, your friends, and admins. 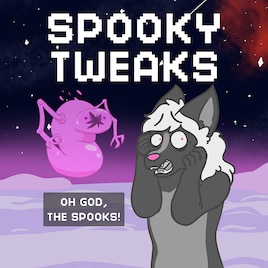 This item has been added to your Subscriptions. Some games will require you to relaunch them before the item will be downloaded.
In 1 collection by Supēsuurufu
Spooky Tweaks: Companion Mods

50 items
Description
Spooky Tweaks is a large scale vanilla overhaul mod that serves as an 'unofficial update' to the game. That is to say, it rebalances, fixes, streamlines, implements unused content, and reduces annoyance. While it attempts to be compatible with content mods, it may conflict with other vanilla-altering mods.

This mod adds no save-altering content! You can add and remove it at any time without destroying your saves, but remember to unstack modified items. Always make save backups when using mods.

Steam limits workshop items to 8,000 characters. The description below is abridged.
For faster updates and the full description, visit the GitHub Repository[github.com]
Project Highlights
General
Moon related things are spooky
Mr Spooks (Erchius Ghost) moves faster, can be knocked back, and dies in lava
Main missions 'clue' hunting can be skipped by scanning the gate
No artificial time padding when beaming
More fuel types, higher fuel values, and higher fuel costs for FTL travel
The sewing machine makes 90% less noise
Vehicles are one-handed, and their costs rebalanced
Grappling hooks use physics just like ropes
Bandages and antidotes can be crafted at any time
Late-storyline outpost shops will indicate if they open later

Latest Update
Racial bonuses for Avian, Human, Familiar, Glitch, and Hylotl
Splash screen is back, but silent and won't interrupt loading
Human codexes follow the mod's lore tweaks
Uncensored names for breakable alcohol bottles
Tents block hunger just like beds
New tooltip information to show mining speeds for tools
Jump height increased to between that of release and beta
Teleportation only takes 0.2 seconds, with no fake loading times
No fake loading time for the Bounty Board

Balance
All staves and wands charge significantly faster
Healing zones from staves heal much faster
Mission rewards gradually increase in magnitude
Erchius Facility always gives 20 Erchius Crystals (1000 Total Fuel)
Challenge doors stay around twice as long (Reduced in Update 2)
Teleporters are not destroyed when broken
Tech consoles are not destroyed when broken
Money loss removed for casual and reduced for survival
Value, speed, and power of unique weapons raised to be more worthwhile
Creatures can be attacked while frozen in time
Racial storage lockers hold 64 items instead of 48

Latest Update
No dropping items on death in Survival mode, but money drop restored to 30%
Mining tools don't use durability, and drills mine in a 3x3 area
Adaptable crossbow requires less energy to fire
Broken Broadsword attacks faster and provides a defensive ability

Crafting
Augments can be crafted at the Research Station, and specify their exact functions
Restored crafting for disabled items such as Perfect Armor, Tall Chair, and Valentines Heart Forge
Ancient themed items and vending machines can be 3D printed

Latest Update
Water coolers dispense water into empty bottles
Pickaxes must be crafted, rather than found as loot or purchased
All Campfire crafting is accessible from the Kitchen Counter
Components are craftable in the tier two furnace, including RAM
Many improvements to learn on pickup
Soda is craftable
Popular Discussions View All (3)

Ejcreeper Jul 19 @ 3:03pm
OH SHET I shet my self upon noticing the spook's dps

oinkoinkmooo May 21 @ 5:03am
I guess pickaxes are not mining tool? because they are loosing durability as The Squire also mentioned. Although I haven't tried the Drills yet maybe they are the ones with infinite durability.

Dragon Ace May 14 @ 10:40am
Can we get a version of this without all the dialogue changes, or at the very least, removing the SAIL lines?

The Pizza is Aggressive Feb 22 @ 9:20am
why did you disable drops for survival mode? that was one of the main features of survival mode

I just liked some of it's features but man this mod really gives out satisfying QOL.

Chillest Mar 27, 2021 @ 7:22am
One of my favorite mods. VERY expansive and cool. Some of the more hard-core elements are less to my taste, and the manner and degree with which some old features were re-implemented seems a /tiny/ bit lacking. However, for myself, as well as many of my friends, this mod is much appreciated for the satire, as well as the throw-back factor. Makes the game feel so much more free, and a furry made this so you know it has to be good. Would recommend, and so thankful to the creator for the undertaking this must have been to develop ;w;