Greenlight > Games > sierraphantom's Workshop
Greenlight is being retired. For more information on how to submit games to steam, refer to this blog post.
This item has been removed from the community because it violates Steam Community & Content Guidelines. It is only visible to you. If you believe your item has been removed by mistake, please contact Steam Support.
This item is incompatible with Greenlight. Please see the instructions page for reasons why this item might not work within Greenlight.
Current visibility: Hidden
This item will only be visible to you, admins, and anyone marked as a creator.
Current visibility: Friends-only
This item will only be visible in searches to you, your friends, and admins.
Café Mildé
Description Discussions0 Announcements4 Comments25 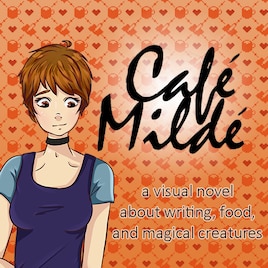 sierraphantom
Offline
See all 10 collections (some may be hidden)
Kickstarter
Recent Announcements View All (4)
Writing and Funding
August 19, 2016 - sierraphantom

I am having a blast writing Cary and Scarlet’s route currently. The two of them are so cute together. They are slightly awkward around each other while figuring out their feelings, but both of them will get more comfortable as they spend time together.

Our kickstarter for Café Mildé is now up and running! Here is the link if you want to check it out: https://www.kickstarter.com/projects/977752191/cafe-milde

Read More
Description
Release date: Spring 2017
Café Mildé is a visual novel with LGBT themes. It takes place in a world where humans coexist with magical creatures who are very much like them, but not quite. The café is located in a scenic port town near Siren Island, which humans tried to invade hundreds of years ago. Now there is an uneasy peace between the species, and magical creatures try to fit in with humans as best they can. Café Mildé itself was created as a place where the two can mingle and hang out safely.

Play as Cary or Stefan and get to know the humans and magical creatures of Café Mildé. Learn their interests and hear their stories. You may even find love.

Cary - A human who lives by the café and works there as a waitress. Cary is best friends with William and is currently studying Creative Writing at a university. She is passionate about her writing, but doesn’t show it to just anyone; she keeps a lot of her thoughts on the inside. Cary is currently writing a new piece, but is struggling through writer’s block.

Stefan - A human who works as a cook in Café Mildé. Stefan is William’s younger brother and he gave up on classes once out of high school. He is a bit stubborn, but loves to have people try his food. Stefan appreciates his brother for giving him his job, even if William and Cary tend to pick on him. His goal is to create a new dish, but needs some inspiration.

Scarlet - A succubus who runs her own café. She started going to Café Mildé to do research on competitor cafés, but wound up visiting more for the community there. Scarlet is headstrong and confident most of the time, but in awkward situations, she gets frazzled. She is pretty young compared to her other magical friends, so she can relate to the humans she knows, having grown up in the same time as them. She wants to break away from her mother and live her own life.

Vincent - An incubus looking for fun times and good company. Vincent can be a bit cocky and flirtatious, but he has more of a head on his shoulders than people think. He visited the café with some friends from the island, and soon became a regular. His hobbies include singing and partial scrap-booking. Vincent wants to try making music his career, but is finding critics among humans and his own kind.

William - A human and the owner of Café Mildé. William can be a bit silly and is usually happy, but does get serious when it comes to the well being of his friends and customers. He created the café as a tribute to Alicia and as a place for humans and magical creatures to hang out with each other. William wants to make sure the café stays safe and will do anything to protect it.

Sasha - A werecat who is attending college with Cary. Sasha is shy at first glance, but is playful when she gets to know someone. Cary made her go to Café Mildé one day after class, and she has frequented it ever since. She feels she can be herself there, and loves to watch her new friends joke around. Sasha wants to get along with and fit in with humans, but is worried they will not accept her.

Rayne - A human who randomly showed up at the café one day. Although unaware it was a magical creature café at first, he was not too surprised and enjoyed his visit. He greatly appreciates the café and views it as a safe haven. Rayne is secretive because of his experiences and past, but is open with his interests and about being transgender. Rayne wants to settle down after all of his traveling, but he may have just found the place.

Alicia - The siren who introduced William to the world of magical creatures when he was a kid. She is a calm and kind person who appreciates all that William has done, but hopes she did not influence him too much. She has been away for a while, but now that she has returned, she plans on visiting the café more often. She wants to see the cafe do well, but she doesn’t want William, Stefan, or Cary to get hurt.

Even without official support from TyranoBuilder, creating a version that runs on Linux shouldn't be difficult, since NW.js itself already runs on Linux.

Sadly, at the moment, TyranoBuilder (the engine we are making the game in) does not support GNU/Linux/SteamOS. However, the developers behind TyranoBuilder are working on Linux support, so it is possible that it might come in a future update.

If that happens before Café Mildé is finished, we should be able to provide Linux support at launch. If not, we may be able to add a Linux version of the game post-release. Unfortunately, we have no control over this, so we will have to wait and see.

DrMcCoy Aug 31, 2016 @ 3:45pm
What operating systems are you targeting? Any chance for GNU/Linux (aka SteamOS) support?

Game Development Championship Aug 8, 2016 @ 2:04am
It's great to see different themes such as LGBT explored by visual novels.