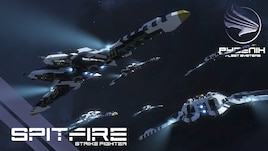 This item has been added to your Subscriptions. Some games will require you to relaunch them before the item will be downloaded.
In 1 collection by Lord Commissar
Phoenix Fleet Systems

Update 31/5/17 - Added Whip's rotor thruster script. it is now no longer necessary to micro-manage the main thrust by pressing "1". The thrusters are now linked to the W key instead, and the craft flies like any other. Also added Naval logos

Check Out the Bomber Variant Here

Rather than building multiple fighter designs, as before, PFS set about developing a single fighter that could meet the roles required of the previous, aging models. The result was the Spitfire - Part Gunship, Part Fighter.

The Spitfire was designed to carry the firepower and cargo capacity of a gunship, but the speed and portability of a fighter. To this end, it was also designed specifically to fit into carriers that were designed to carry much smaller craft than itself.

Initial tests were more than satisfactory. The Spitfire proved its ability to not only take on larger ships with its heavy armament, but also possessed an interceptor like acceleration that allowed it to evade pursuing fighters easily, while its automated turrets could make short work of any enemy strike craft that dared get too close.

User Manual - Read This or Your Wings Will Explode
It is of extreme importance that you always lock your wings before moving the ship. This can be done via tab 1, button 4, as seen below. Obviously, you'll need to unlock the wings any time you want to change their position. The wings are also set to automatically lock once you reach over 10 m/s. This is a convenience zone so you can move them while docking with a carrier. However, you should always lock the wings down BEFORE activating the wing thrusters, or your ship will pitch forward and possibly break in the first 10 m/s of acceleration.

Misc
Interested in learning about the lore behind these ships?
< >
59 Comments

Halo5 Apr 18, 2018 @ 7:42pm
I'm in creative and I spawned this craft in, and when I hopped into the main cockpit the rotor lock and wing thruster icons were missing, easy fix. But, when i locked the wings and turned on the large thrusters for the wings they simply didnt work. They would turn on, then off and continue repeatedly for no apparent reason. Everything else worked just fine. Great build, other then the trouble with the wing thrusters.

Lord Commissar  [author] Feb 21, 2018 @ 7:40pm
you could theoretically make blueprints for the wings by themselves and have them projected onto the body once the center is complete. you'd have to put projectors on the rotor connections for that.

Screaming Alpha Feb 20, 2018 @ 9:35pm
so I loaded this and the bomber in a projector and there are no wings, just the body and rotors

dastormdragon Aug 25, 2016 @ 12:57am
it is very star wars-esque, all the star wars fighters have foldy wings (lock s-foils in attack position!)

dastormdragon Aug 25, 2016 @ 12:53am
+kalamyar the spitfire was an excellent British fighter in WWII, this definetely lives up to the name.

dastormdragon Aug 14, 2016 @ 12:26am
U could use the mod that adds blocks that have actions when you press a key to get the wing thrusters to work