Greenlight > Concepts > 7 Keys Studios's Workshop
Greenlight is being retired. For more information on how to submit games to steam, refer to this blog post.
This item has been removed from the community because it violates Steam Community & Content Guidelines. It is only visible to you. If you believe your item has been removed by mistake, please contact Steam Support.
This item is incompatible with Greenlight. Please see the instructions page for reasons why this item might not work within Greenlight.
Current visibility: Hidden
This item will only be visible to you, admins, and anyone marked as a creator.
Current visibility: Friends-only
This item will only be visible in searches to you, your friends, and admins.
Angels & Demigods
Description Discussions0 Announcements3 Comments8 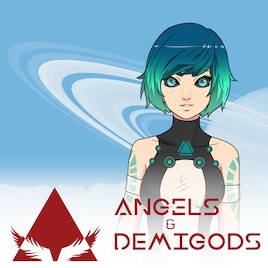 Angels & Demigods is now on Steam! You can download it for free for both VR and desktop. Thank you everyone for your support! ;)

If you'd like to try out an early alpha build of a part of a scene for the HTC Vive than here's a link to it: https://drive.google.com/open?id=0B0gSO7RXHIYhSGpWWDFBeThXU1E - it's gameplay of a few branches in one room.

Travel with us into the distant future in which man plays god by creating angels to protect him. Immerse yourself in an alien world and discover why you were woken up after a long slumber. Meet friends and foes, discover their objectives and most importantly try to stay alive. Angels & Demigods is an atmospheric sci-fi visual novel being brought to you in VR. It is a story and dialogue centered visual novel game in which you create your own adventure by carefully choosing what you say and do.

7 Keys Studios is led by veterans in their respective industry - Stan Kuhn & Milan Kazarka. Stan is the mind behind many AR & VR apps and Milan is the creator of the cyberpunk visual novel series Invisible Apartment. They have a long history of creating inspiring products for a myriad of platforms.

NamelessProtagonist Aug 2, 2016 @ 4:45am
Looks like a very interesting concept, choice-based games has always really been something I've enjoyed, especially if multiple endings are included. The art stlye looks really cool and attaching the game to VR could be a very good idea if done right. I'm going to keep an eye on this, good work as of thus far though.