Store Page
Starbound >  Workshop > Kave Johnson's Workshop
This item has been removed from the community because it violates Steam Community & Content Guidelines. It is only visible to you. If you believe your item has been removed by mistake, please contact Steam Support.
This item is incompatible with Starbound. Please see the instructions page for reasons why this item might not work within Starbound.
Current visibility: Hidden
This item will only be visible to you, admins, and anyone marked as a creator.
Current visibility: Friends-only
This item will only be visible in searches to you, your friends, and admins. 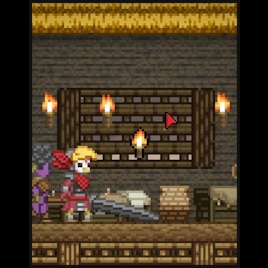 This item has been added to your Subscriptions. Some games will require you to relaunch them before the item will be downloaded.
In 1 collection by Kave Johnson
Mods by Mackinz

8 items
Description
"Why break your lights when you can just *pop* them off?"

This is a remake of an old mod I really liked back in Enraged Koala: Pop-off Lights (original link: http://community.playstarbound.com/resources/pop-off-lights.1247/ )

What it does is removing the time spent mining a light source (ex. Torch) by changing a script to make the object drop on use! Trust me, you'll appreciate this over having to mine it.

And while this means you cannot manually "turn off" an affected object, you can still wire them up and have them operate like before! While wired, a light will not pop-off if 'used'. Simple, yet effective.

Currently, the mod only affects Torches, Medieval Torches, Cheap Lights, Electric Lights and Oil Lanterns. Though I will only use it for the Torches and Cheap Lights, I'm sure someone would be interested in having other lights pop off the wall. If requested, I'll release an update that includes a desired light.​

Boiled Potatoes Mar 17, 2020 @ 5:53am
I'd prefer it to be just your bog standard torches and cheap lights which are likely to be the only light sources for mining you'll ever use out of the list. Lanterns have their cosmetic value even when turned off.

Bry Jul 31, 2016 @ 8:38am
"And while this means you cannot manually "turn off" an affected object, you can still wire them up and have them operate like before! While wired, a light will not pop-off if 'used'. Simple, yet effective."