Store Page
Starbound>  Workshop > Mickyan's Workshop
This item has been removed from the community because it violates Steam Community & Content Guidelines. It is only visible to you. If you believe your item has been removed by mistake, please contact Steam Support.
This item is incompatible with Starbound. Please see the instructions page for reasons why this item might not work within Starbound.
Current visibility: Hidden
This item will only be visible to you, admins, and anyone marked as a creator.
Current visibility: Friends-only
This item will only be visible in searches to you, your friends, and admins. 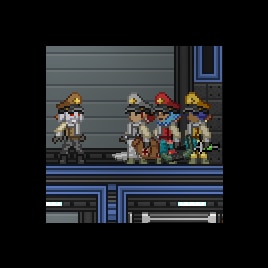 Darexon
Offline
See all 34836 collections (some may be hidden)

This item has been added to your Subscriptions. Some games will require you to relaunch them before the item will be downloaded.
Description
This mod aims to make recruiting your crew a more worthwhile endeavour, greatly increasing the strenght and usefulness of your crew members.
By making each class unique and useful in their own way, choosing the right person to bring on a mission can make a difference.

Additionally, your tailor will now consider your head slot items for your crew's uniform!

Buffs, nerfs, tweaks, we got it all!

Features
Custom uniforms include head items
Default uniform now has a cap
Crewmembers carry different weapons (depending on class)
Crewmembers are stronger, do more damage, have higher health, regeneration and have varying after-hit invulnerability timers depending on crew class
Increased number of active crew followers to 3 (was 2)
Crewmembers can apply field buffs for farther away

Soldier
Soldiers are versatile, capable of dealing good amounts of damage in any situation. Always a safe choice to bring along.
Equipped with assault rifles and broadswords

Outlaw
Outlaws are nimble and reckless, favoring quick engagements over prolonged fights. They can often slip through right into enemy lines, but they can't withstand too many hits.
Equipped with sniper rifles and daggers

Engineer
The Engineer's main role is working on the ship, but on the field they're in charge of the big guns! However, rockets may have a hard time hitting small, fast targets and having no melee weapons of their own, Engineers are better suited for taking down big, slow targets.
Equipped with rocket launchers, avoids getting too close to enemies if possible

Chemist
Chemists trade personal firepower for applying powerful buffs to the leader
Equipped with pistols and autopistols, avoids getting too close to enemies if possible

Medic
Whether it's during a tough fight or a long expedition, medics will do their best to stop you from bleeding all over the place. A perfect addition for every mission.
If your health is under 50% (and the cooldown is over), simply stand next to a medic to get healed.
Equipped with pistols and autopistols, avoids getting too close to enemies if possible

Mechanic
Mechanics spend most of their time working on the ship, but on the field they are extremely sturdy, boasting by far the most health and regeneration of every other class.
Their shotguns are handy at dealing with multiple enemies, or hard to hit targets.
Equipped with a shotgun and wrench.

Janitor Quartermaster
The Quartermaster is the backbone of every crew. He's in charge of supplies and acts as your personal merchant, selling consumables and general supplies, some of which would be otherwise difficult to find.
Buying items is 5% cheaper than outpost merchants and selling items yields 5% more pixels.

Changelog
1.7b
Added compatibility for Starbound 1.3 (thanks Darexon!)

1.6
All combat classes have gone through a balance pass, they should better fit their role now. Outlaws and mechanics in particular have different purpose in mind.

Note that compared to vanilla, all crewmembers are stronger across the board. This changelog compares the previous values from this mod

1.5
The Janitor finally got a promotion! Now called Quartermaster, they act as your personal merchants. They have slightly better prices for buying and selling items compared to merchants in the outpost.
(If your former janitor was in your active party at the time of this update you will be unable to dismiss them, easiest way to fix it is to trap them in lava or have a monster kill them, they'll respawn on the ship and stay there)
Idle crewmembers will wander around less frequently
Penguins no longer have their weapons out at all times

In a nutshell, soldiers are jack of all trades, outlaws excel at long range and engineers are heavy hitters, particularly effective against bosses but they won't fare well against small and agile enemies!

1.2
Crewmembers can apply field buffs from slightly further away
Bugfixing

Uninstall Notes
It should be safe to unistall whenever you please, however the removal of default headgear from all existing crewmembers is not reversible. You have been warned.

Known Issues
If you complete one of the guard villager quests that upgrades their headgear, they'll sometimes still wear it if they are recruited.

Quartermaster might move away while you're trading with him. This is a vanilla bug that occurs with the tailor aswell.

Future of the Mod
I never intended for this mod to be anything more than minor tweaks to make crews more interesting to play with, and I believe the last version achieved it to the best of my abilities.

Should a game update break this mod at a later date.. sadly that's the nature of modding, but it's very unlikely I will come back to fix it. If you'd like to contribute, feel free to get in touch.

All of the source files are available on the mod section of the Chucklefish website and anyone is free to modify and redistribute them as they please, so long as credit is given.
Popular Discussions View All (10)

How to give your crewmembers hats and things? i want to give my neo discs and banana hats
MrVauxs

A thing I want to know
gibs

Homsar Runnar Aug 14 @ 10:04pm
Ever since 1.4, I can no longer recruit quartermasters - they're all janitors, and speaking to them just adds them to my active party. The rest of the mod seems to work fine, all other roles are working as expected. Is anyone else having this issue? I'm trying to figure out whether it's some kind of mod conflict, or just a problem with this one.

Morton Jul 21 @ 2:44am
pretty sure incompatible

MimikGames Jul 20 @ 11:45am
Anyone know if this is compatible with FU?

Catboy Café Manager Jun 9 @ 5:24pm
sweet, now to figure out how to stop them form surrounding my damn furnaces

Dante Luna Dec 6, 2020 @ 11:23am
No idea why a trash mechanic should have more hp than a combat focused crew member lmfao

Monolith Sep 30, 2020 @ 9:44pm
This is perhaps one of the most useful mods I have run across. The only possible improvement I could see is the ability to use the tailor to assign different outfits to different crew members... But that would probably need a whole new mod.

muntaqeen Sep 25, 2020 @ 1:46pm
Just a little question, are there unlisted crew jobs that aren't mentioned anywhere or something ? I just recently got 2 members that isn't anywhere on the forums, they are the Hunter and an Officer. I must be missing something...
< >